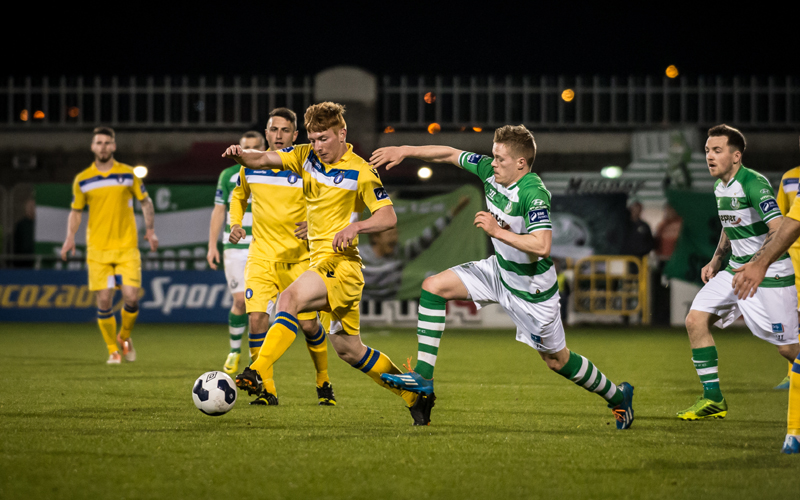 Gary McCabe’s early second-half penalty saw Shamrock Rovers edge to a 1-0 victory at Tallaght Stadium in the final game of the 2014 season on Friday night, but Limerick still secured a top-half finish despite the result.

On the back of three consecutive victories, Martin Russell’s team arrived in Tallaght full of confidence with eyes on at least a sixth-place position in only their second year back in the Premier Division.

With leading scorer Rory Gaffney suspended, Kieran Djilali led the line with support from Ross Mann and Ian Turner out wide and Lee-J Lynch in an advanced midfield role.

Chances were few and far between in the opening 25 minutes, with Turner failing to convert a half-chance when a whipped Patrick Nzuzi cross made its way through bodies.

Limerick’s best effort came on 24 minutes from a side-footed Shane Duggan effort, arising from good interplay between Mann and Djilali. Unfortunately it lacked power. Rovers’ best effort came soon after when McCabe was given too much space and he drove a 30-yard piledriver just over Ali Abass’ bar.

The game opened up as the first half progressed, with first Luke Byrne and then Ciarán Kilduff failing to convert chances from close in. That seemed to spur Limerick into increasing the tempo and they nearly took the lead on 40 minutes when Turner beat Craig Hyland from 25-yards with a dipping drive but the woodwork intervened.

The second half started at a crawl until Rovers were awarded a soft penalty on 55 minutes when Samuel Oji was adjudged to have pushed Kilduff. Despite a valiant effort from Abass, McCabe converted to give the Hoops the lead.

Limerick’s best chance of the period came when Turner worked wonders down the left on 65 minutes to set up skipper Duggan but Hyland saved comfortably. Soon after, Lynch made room for himself but his 20-yard effort lacked power and the ‘keeper fumbled it behind for a corner that came to nothing.

Having replaced the injured Nzuzi early in the half with Prince Agyemang, Russell used his last two changes when he introduced Joseph Ndo and Darragh Rainsford for Shane Tracy  and Mann on 72 minutes.

Turner, who impressed all night on both wings, almost provided a deserved equaliser in the final minute but Djilali headed over at the back post and the hosts held on for the win.

Our thanks to all the fans who made the journey to home and away games this season and see you all in the Markets Field in 2015!