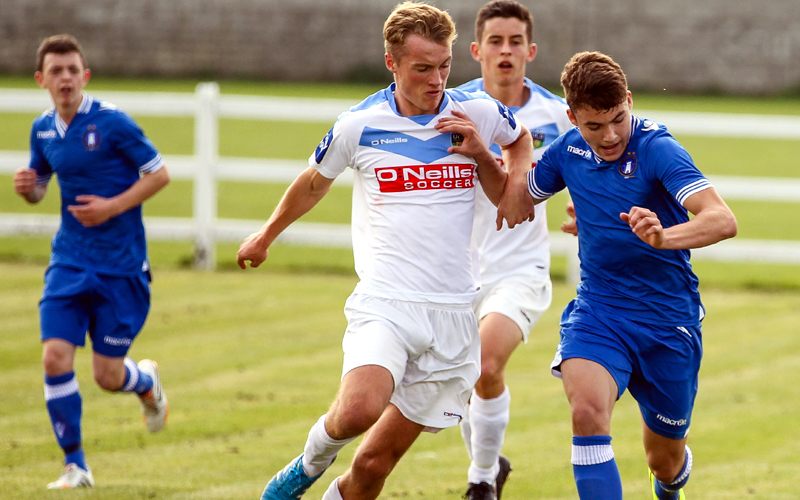 Three of Limerick FC’s underage fixtures have been called off this weekend due to the bad weather, with just the Under-19s still down for action on Sunday.

Ger Costelloe’s Under-15s were hoping to extend their unbeaten record in all competitions to 17 matches at Aisling Annacotty in the Premier League on Saturday.

The young Superblues continued their National Cup adventure with a dramatic penalty shootout win over Crumlin United in the last 16 at Hogan Park last weekend.

Andy Quaid scored a deserved equaliser late in normal time and it was left to Liam O’Sullivan to dispatch the winning spot-kick as they edged through 7-6.

They are three points clear at the league summit, five ahead of third-placed Aisling, and another victory could have delivered a knockout blow to their opponents’ title hopes. When the teams met in September, Limerick came out on top 10-1.

On Sunday afternoon, Tommy Barrett’s Under-19s will take a step closer to the Champions Knockout Phase if they overcome Bray Wanderers in the Southern Elite Division at White Gates, kick-off 2pm.

The young Blues are well placed in second to seal a qualification place in the top four but in a tight race they still have points to gather, with seventh-placed Bray still harbouring outside hopes of a late surge into the quarter-finals. Back in October, Limerick beat the Seagulls 1-0 at the Fairgreen.

Back on Saturday morning, Robert Hogan’s fifth-placed Under-11s were set to welcome seventh-placed Janesboro to Hogan Park in Division One.

Limerick still have an outside chance of the title but back-to-back draws have damaged their ambitions, although they extended their unbeaten run to four matches. Back in September, they won 2-1 at Pearse Stadium.

Also at Hogan Park, Peter Clarke’s third-placed Under-13s were down to entertain fifth-placed Mungret Regional in the Premier League.

Four weeks ago at this level, the young Blues battled back from two goals down to defeat Corbally United, and they were looking to make it a double over Mungret having beaten them 3-0 back in September. Pike, though, are currently in a strong position for the title as they still boast a 100 percent record.

Meanwhile, Martin Russell’s first team are in action on Saturday afternoon when they face Cork City in the Munster Senior Cup semi-finals at Clounreask in Askeaton, kick-off 1pm. Admission is €5 while Under-16s go free.