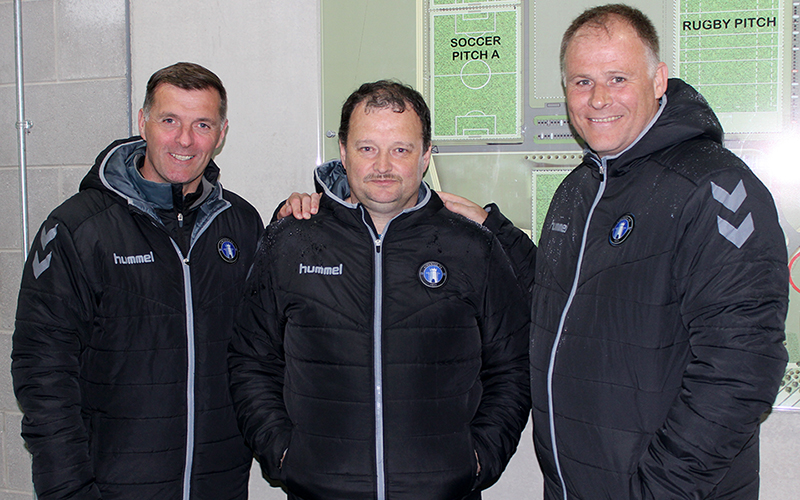 Limerick FC are pleased to announce the appointment of Ger Costelloe as manager of our SSE Airtricity Under-15 National League team, ahead of the introduction of the new League later this year.

Costelloe is a familiar figure around the club having joined the Limerick FC Academy in 2014 following a long association with the Desmond League including managing their Kennedy Cup squad.

Costelloe has been heavily involved with the Shannonsiders’ Under-15 and Under-16 squads in the Limerick District Schoolboy League, as well as gaining experience in the Under-17 National League.

He recently oversaw Limerick’s Under-15 LDSL Premier Division success, and next weekend they have the opportunity to complete a League & Cup double as they face into the Premier Cup final.

Costelloe – pictured (centre) with Academy Manager Willie Boland (left) and new first-team manager Neil McDonald at the University of Limerick on Saturday – said: “I’m really looking forward to the challenge. Our season is coming to an end now next week. We will take a couple of weeks’ break and then we’ll get stuck into the National League.

“I think the introduction of the National League is a great move. In the long run, I think it will benefit everybody, even local teams because it will even them out. It has to progress the elite players because you’re getting them at a younger age and spending more time with them.”

The Under-15 National League commences with a short season in August before a full campaign in 2018, and Costelloe believes that that will benefit his squad. He said: “It will help because you’re talking about players coming into it and it will be completely new for them – the standard, the style, the whole lot. It will be good to get them to see it in a short burst and then get settled into it next year.”

Boland added: “We’re very happy to have Ger in as our Under-15 National League manager. He has got great experience. He has worked in the Desmond League. He has been with the club for a few years now and has worked with the majority of the players that we will be looking to bring into the squad.

“It’s important that we have some continuity in that regard. He’s a good coach and he has got a good manner about him. We’re very, very glad to have him in charge. He’s familiar with the way that we try to play in the Academy. He has put that into practice. It’s ideal to have him in this situation to take the team forward and work with the players he has already worked with.

“I think the introduction of the Under-15 National League is great. With the Under-17s and Under-19s, I think it has been a success. With the Under-15s now, it starts that conveyor belt a little bit younger, and it will be great for the players to test themselves against the best in the country, against other League of Ireland players. It’s something that everybody in the club is looking forward to.”