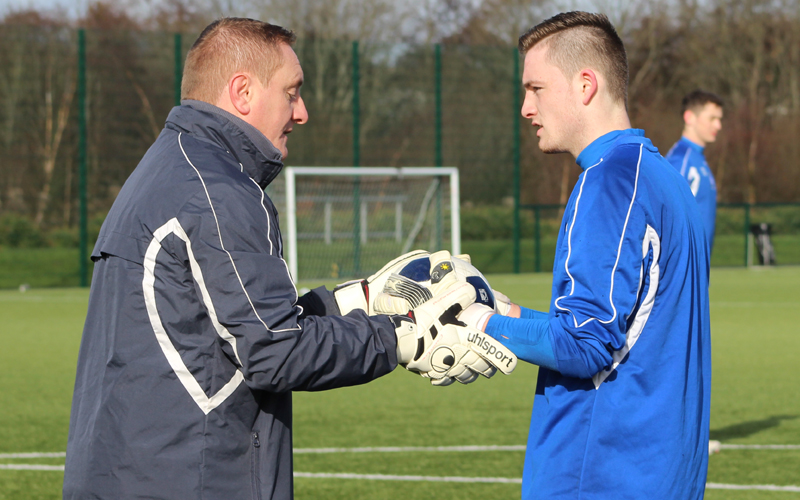 Limerick Under-19 goalkeeper Tommy Holland has targeted a “big three points” for his side when they take on Athlone Town at the Fairgreen on Saturday afternoon (kick-off 2pm).

The young Superblues have returned from the Christmas break in good form, recording two wins and a draw as well as three clean-sheets.

That sequence of results sees them well placed to qualify for the Champions Knockout Phase with six games remaining, but Holland is wary of the threat posed by Athlone, who defeated them back in October.

“It should be a good game. It will be a tough one. We’re looking at getting a big three points and hopefully we will,” Holland, who arrived from Ardcroney, told LimerickFC.ie.

“We’re on a good run of form. We haven’t conceded since Christmas and have seven from nine points, and two clean-sheets away from home which is always good. Hopefully we keep the form up.

“The last time we played Athlone was tough. We were a bit sloppy that day. We threw it away when we had our chances. A couple of silly mistakes cost us the game.

“Hopefully we won’t have that in the back of our minds and if we cut out the mistakes we’ll be alright.”

Holland was in outstanding form as Limerick secured a point against Cork City at Bishopstown last weekend, and he says the competition from Arkadiusz Mamala and coaching from Eddie Hickey is helping him to progress.

“I was happy with my performance,” Tommy said. “We all played well in fairness. We had our chances and could have won it.

“It was a good game. It was a tough one. We couldn’t play much football because of the pitch.

“I’ve been happy with my performance and the team’s performance this season. We’re a young team and it has been a good season so far. Hopefully we can finish it out well.

“Arek is a very good young ‘keeper. He’s doing very well at the minute. It’s good competition; he’s pushing me on and I hope I’m bringing him on as well. Eddie is a very good coach. He has helped me out a lot.

“It’s a good club. The setup is brilliant and they’re looking after me. I reckon we should be looking at the top four. That was our goal at the start of the season so hopefully we’ll reach it.”