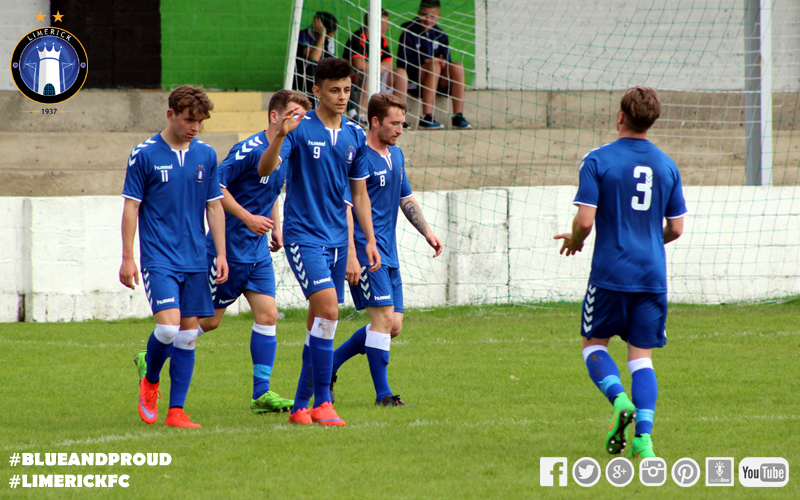 Two goals in each half saw Limerick back to winning ways as they defeated Wexford Youths 4-0 in the Under-19 National League at Hogan Park on Sunday afternoon, where Yoyo Mahdy was again on the mark.

Mahdy was twice denied by ‘keeper Aidan Hynes, and then Wexford threatened, with Davey Doyle and Séamus Casey striking just off target in quick succession.

But Limerick deservedly broke the deadlock eight minutes before the break when Declan Cusack picked out Mahdy who slotted in – making it three goals in a week – and Oisín Kelly quickly doubled that lead.

The points were made safe after the break when Evan Cusack fired in with the ‘keeper stranded, after more good work from Mahdy.

And while Tommy Holland produced a superb save, it was Limerick who remained on the front foot, captain Paudie O’Connor heading off the crossbar, before they eventually added a fourth with Clyde O’Connell’s last-minute penalty.

Manager Tommy Barrett made four changes to the team that lined out in Wednesday’s home defeat by Waterford United. Out went O’Connell, Liam McCartan, Ross Mann and Seán McSweeney, with the quartet replaced by O’Connor, Kelly, Ross Fitzgerald and Evan Cusack.

After a quiet opening quarter, the game came to life midway through the first half when Val Feeney shot over from distance. Feeney then supplied a through-ball for Mahdy but Wexford’s defence did well to block the striker’s path.

Mahdy then tested Hynes with a free-kick from outside the box which was pushed away by the ‘keeper. In the next phase, a right-wing cross was met by Declan Cusack whose header flew narrowly wide.

On the half-hour, Kelly’s delivery picked out Mahdy whose strike brought out a smart save from Hynes. Then, at the other end, Doyle broke through on goal but his effort flashed past the post, before Casey drilled inches off target from the edge of the box.

But Limerick took full heed of those warning shots and – after Feeney saw a strike held – they hit the front on 37 minutes when Declan Cusack provided the assist with a ball over the top which Mahdy latched onto and finished coolly beyond Hynes.

Soon, it was 2-0 when Feeney’s free-kick was attacked by O’Connor, the ball falling kindly to Kelly in the box and he drilled home.

Early in the second half, Wexford shot just over, but the game was put beyond any doubt shortly after. The ‘keeper blocked at the feet of Mahdy but the ball was only cleared as far as Evan Cusack who fired in from 18-yards.

Wexford almost pulled one back but Holland produced a wonderful save. Close to the hour-mark, Limerick almost added a fourth but O’Connor’s header from a set-piece came back off the bar.

Past the hour, Declan Cusack’s shot was tipped over by Hynes, and then substitutes O’Connell and Ross Mann went close, the first a header that shaved the post while the latter was a shot that rose over the near upright.

Fellow sub Seán McSweeney should have scored from close in but he poked the ball wide. But Limerick did get a fourth late on 89 minute, after Mann was fouled – Niall Murphy earning a second yellow card for it – O’Connell stood up and put the ‘keeper the wrong way.