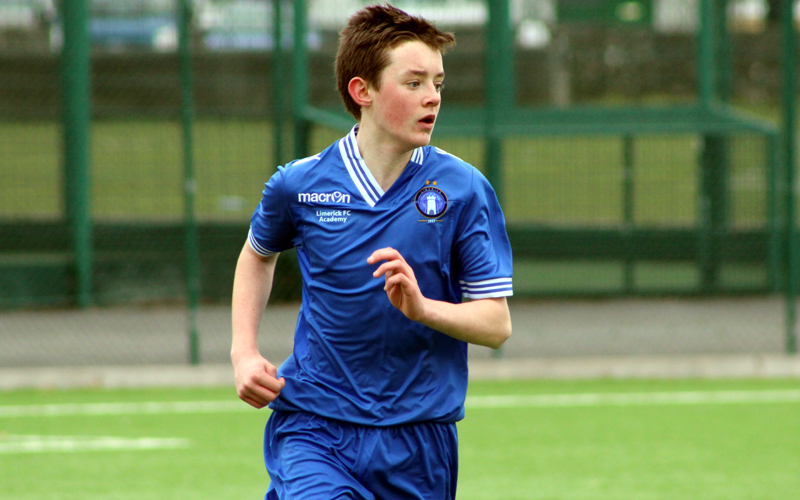 Eric Costelloe netted his first goal of the Under-15 Premier League season to make the points certain in a 2-0 win over Fairview Rangers at Hogan Park on Saturday afternoon as leaders Limerick bounced back from recent disappointments.

The young Superblues – who had enjoyed a 17-match unbeaten run in all competitions – went into the game on the back of a heavy league defeat at this level a fortnight earlier and then exited the National Cup at the hands of Saint Joseph’s Boys.

With those results on their mind, Ger Costelloe’s side were eager to return to winning form. And they got off to the ideal start when a shot from distance was parried by the visiting ‘keeper and Ethan Butler was there to tap in the opener.

Limerick were without the services of Ronan Quinn, Carlos Bestard – who have 43 goals between them this term – and Ben Quinn. Still, they started brightly with intense pressure but, having taken an early lead, the game lulled on what was a difficult day to play for both teams.

The hosts should have been further ahead but they were unable to find the finishing touch. Midfielder Lee Devitt – after recovering from a broken leg – showed himself to be returning to form with some excellent play from the centre of the park, delivering excellent passing and vision.

Into the second half, Limerick again failed to convert the opportunities that were falling their way and it appeared as though Fairview could nick one on the counterattack on several occasions.

However, as the closing stages approached, Limerick were awarded a free-kick on the edge of the area. The ‘keeper was unable to hold a thunderous drive from Andy Quaid and Costelloe was on hand to find the net. It was his third goal of the season in all competitions and first since October.

That was enough to secure the three points and although the desired performance levels may not have been reached, it is a return to winning ways for the team.

It was a hard-working display from Fairview who were disciplined throughout and Limerick look forward to another tough encounter with them in the League Cup on Monday 13 April.