Dominic Foley and Derek O’Brien, 22/02/2012 (Photo: Keith Wiseman)Limerick FC is delighted to announce two new high profile signings in advance of the upcoming season. Striker Dominic Foley and midfielder Derek O’Brien both join up with the club today and add great experience to the squad.

Charleville native Dominic Foley, 35, is a former Irish International winning six caps during Mick McCarthy’s reign and signs from Cercle Brugge in Belgium where he has spent the last three seasons. Foley started his career with Wolverhampton Wanderers and the striker has also played with Watford, SC Braga, Bohemians and KAA Gent.

Derek O’Brien, 32, is a Tralee native and joins from Munster rivals Cork City where he was influential in last season’s successful promotion campaign. The tricky winger has also played with St Patrick’s Athletic and Galway United in a long and successful career. 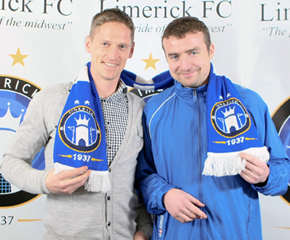 Speaking at the unveiling Pat O’Sullivan, Chairman Limerick FC, stated: “I would like to welcome both Dominic and Derek to Limerick FC and am delighted that, once again Limerick FC has been able to attract players of such high quality and profile to the club despite interest in both players from numerous other clubs. Both players have seen the potential that this club has to be a huge success both on the field and off the field and will start training immediately as the new season kicks off in less than two weeks time. Pat Scully has pulled together a squad with some very experienced players mixed with some exciting young talent for the coming season and we are delighted that we can now add both Dominic and Derek to this squad.”