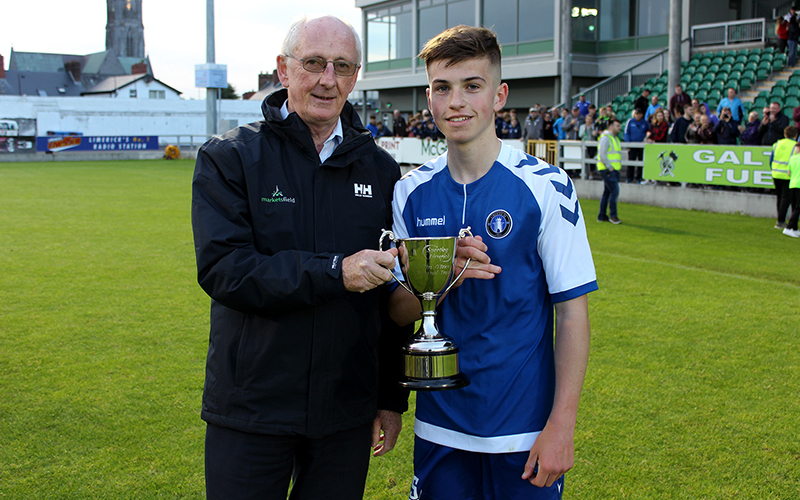 Sixteen-year-old defender Tomás O’Connor lifted the Sporting Limerick Cup as Limerick ran out 8-2 winners over LDMC Premier League Champions Janesboro at the Markets Field on Tuesday night, in the second edition of the charity cup.

The Superblues fell behind inside a minute when the ball bounced kindly for ‘Boro captain Shane Clarke who made no mistake with the finish. Limerick, though, were ahead by the break after goals from Ian Turner and Chris Mulhall.

Former Blue Ben Quirke dragged Janesboro level early in the second half, but after quick-fire goals from Mulhall and Clyde O’Connell it was one-way traffic as Neil McDonald’s side hit a further four without reply with a brace each from Garbhán Coughlan and Under-19 striker Adam Foley.

For the game, McDonald gave game-time to skipper Shane Duggan, defender Shane Tracy and Turner, all of whom would withdraw at the interval, while there were rare minutes given to Shane Costelloe. O’Connor – younger brother of Leeds United’s Paudie – started in central defence.

There was an early setback for Limerick as they trailed after 60 seconds, Clarke capitalising on a fortuitous break to slot beyond Tommy Holland. After Seán McSweeney saw his shot held, Janesboro should have made it 2-0 on 14 minutes when John Connery got to the by-line and delivered a back-post cross for the free Clarke but he headed wide from close range.

Immediately, Limerick were level as Turner cut in from the left and struck a shot from 20-yards which bounced past John Mulready. On 22 minutes, the ‘keeper saved from Coughlan before Duggan dragged a shot wide. Holland then produced a stunning save to stop Connery’s shot which seemed destined for the top corner.

On the half-hour, Stephen Kenny fired over from 25-yards, before Limerick went close to a lead goal on 32. Good build-up from the Blues ended with Mulhall being denied well by the ‘keeper who then got down smartly to push Coughlan’s shot behind. From the resulting corner O’Connor headed just over. 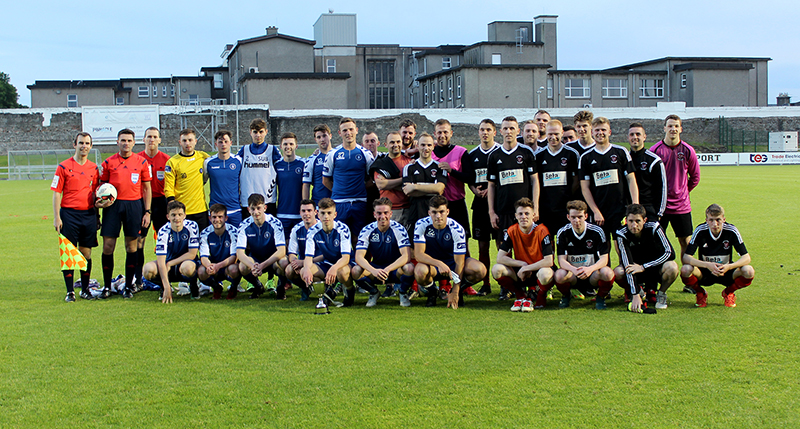 Both teams pictured after an entertaining Sporting Limerick Cup at the Markets Field, 13 June 2017.

But Limerick did take an advantage into half-time as McSweeney slipped in Coughlan on the left of the box and he got past the ‘keeper before squaring for Mulhall to finish. The game was level again four minutes after the restart when Connery crossed for Quirke to smash in at the back stick.

However, two goals in three minutes quickly put Limerick in total control. The first came from the penalty spot on 53 after Coughlan played in Mulhall who was taken out by the ‘keeper, the forward stepping up himself to coolly finish. Substitute Clyde O’Connell then blasted in from close range after McSweeney had flicked on Kenny’s right-wing cross.

It was 5-2 on 66 minutes. Liam McCartan went on a fabulous run from halfway, getting to the edge of the box where he struck a shot off the bottom of the upright, Foley on hand to follow in with a good finish from a tight angle.

Coughlan then deservedly got in on the scoring act when Karl O’Sullivan broke through midfield and fed Foley on the left of the area, his pass across goal finished neatly by Limerick’s No12. O’Sullivan played the assist for Coughlan’s second and the Blues’ seventh on 87 minutes as his chip was finished clinically, and there was still time for one more as Foley produced a fine individual goal to cap an eye-catching cameo.