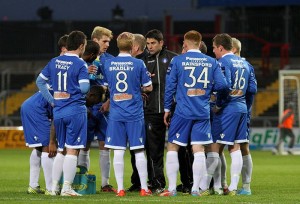 Limerick FC welcome Airtricity league Champions Sligo Rovers to Thomond park for the second time in six weeks after the teams were paired to contest the quarter final of the EA Sports Cup. Games between the two sides have been tight in league competition this season with the previous game in Thomond an entertaining 0-0 draw following on from Sligo’s 2-1 victory in the Showgrounds earlier in the season.

The Superblues advances to the quarter final stage following a penalty shoot-out victory over Waterford United. Sligo Rovers were more comfortable during their 4-0 demolition of Mervue United in the previous round.

Stuart Taylor has no fresh injury worries following last night’s thrilling 3-2 victory over Dundalk FC and the team underwent a light training session this morning. Patrick Nzuzi, who picked up an injury in training prior to the Dundalk match is not expected to feature, while Pat Purcell and Steven McGann are both on the long term injured list. Stephen Bradley will be available after serving a one match suspension, Jeffrey Judge will serve the second of his three match ban tomorrow night.

Sligo Rovers report that Rafael Cretaro, Aaron Green and Danny Ventre will miss the game, while striker Anthony Elding remains on the banned list for the game. Sligo Rovers’ previous match was a 2-0 win for the Bit O’ Red in Tolka Park, in a game played Friday night.

Supporters are asked to remember that season tickets and season ticket cards cannot be accepted for tomorrow night’s match, also no complimentary tickets will be issued for the match, in line with competition rules.