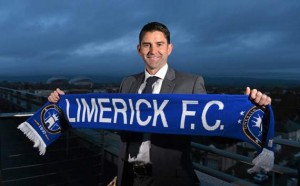 Limerick Football Club embark on a pre-season tour of Scotland this Friday and Manager Stuart Taylor took time to speak with www.limerickfc.ie ahead of the trip, explaining the benefits to the squad, which go beyond what happens on the pitch, “The trip is going to be really good for the squad, a chance for the new players to gel with those that have signed back on again this season, it’ll create good harmony about the dressing room” said Taylor, “The spirit has been fantastic up to now and the new boys coming in are a good addition, it gets everyone the chance to know each other on and off the pitch, lets them know each other’s character which is really important.”

Taylor doesn’t foresee any issues with having so many additions to the squad in recent weeks stating the new players have ”already had a very good introduction over recent days and everyone is looking forward to working hard to bring that strong spirit to fruition on the pitch.”

While the team bonding aspect of the trip is important, supporters will see the benefit on the pitch following the focused training sessions and matches against good quality opposition “We’re now going to concentrate on the final ball into the box, tightening up and brushing up” explained Taylor, “up until now it’s been about game awareness, building fitness and taking on board a new philosophy and way of playing, but now it’s about looking at the finer details and the Scottish trip is a great experience for the boys in that respect. We play Dundee United and Hibs so it’ll be a good test. We’ll be put under pressure and it’ll be good to see how the boys handle that.”

While a large group will travel to Scotland, there is still the opportunity for a couple of players to be added, with the manager looking to add at least one more signing before the Cork game on March 10th “The new season is just around the corner now, so we’re working on the fine detail in training now, the sharpness at either end of the pitch that improves finishing and keeping clean sheets. I’ve been impressed with the U19 squad so some of those will make the step up to the senior squad and I’ll looking to bring one more player in from the UK.”

The club will update regularly from the Scotland trip on www.limerickfc.ie as well as on our social media outlets. Follow the Club on facebook.com/limerick.footballclub and on twitter @LimerickFcie