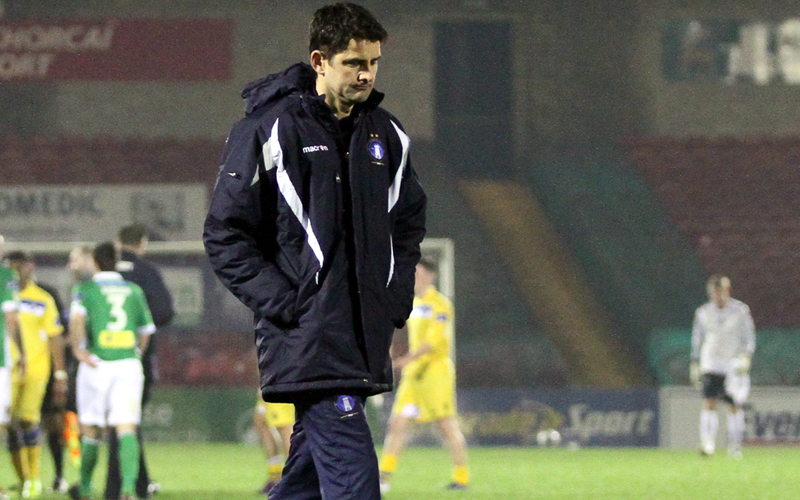 Declan O’Brien’s tap-in on the half-hour was enough to earn Drogheda United a 1-0 win over Limerick at Thomond Park on Friday night, with Tam McManus’ late goal ruled out for offside.

Drogheda started the better but it was Limerick who had the first real opening with Shaun Kelly before the quarter-hour mark but the defender was twice denied by Dave Ryan.

The visitors then took the lead through Declan O’Brien’s close-range finish. It could have been 2-0 soon after but Gary O’Neill was brilliantly denied by Barry Ryan.

James McGrath almost netted for the second time in six days when he rose to meet Shane Tracy’s cross but Ryan smartly tipped the ball over.

Into the second half, the Limerick Ryan had to be at his best again when he got down to turn over Alan McNally’s header after the centre-half had connected well with Eric Foley’s free-kick.

On 69 minutes, Jason Hughes found Shane Duggan with a superb through-ball but the hometown captain saw his low shot go agonisingly past the upright.

Shortly after, the game could have been killed off but Ryan produced another fine stop as he denied O’Brien.

Then the Stadium suffered floodlight failure for almost ten minutes. When the action got back underway, Tracy saw a low free-kick pushed away by Ryan, and then debutant McManus had the ball in the net but it was disallowed for offside.

And with that went Limerick’s chances of snatching a point as they suffered their first home defeat of the season.

For the game, manager Stuart Taylor made one change to the team that lined out in last weekend’s draw at Saint Patrick’s Athletic and it was an enforced one as Shane Costelloe was ruled out through injury and replaced by Darragh Rainsford.

Limerick were boosted by the return of Craig Curran and Robbie Williams along with the arrival of McManus onto a strong looking bench.

Indeed, it was the Superblues who had the first real chance on 13 minutes when Rory Gaffney’s wonderful skill opened up the chance. Hughes picked up the ball and gave it to the on-rushing Kelly who twice saw his shots pushed away by Ryan.

Drogheda broke the deadlock on the half-hour when a goal-mouth scramble saw the ball squirm past Ryan and O’Brien was on hand to tap in close to the line.

On 37 minutes, after standing firm to some pressure, Drogheda broke at pace and O’Brien slipped O’Neill in, the experienced striker taking his time before driving a shot that was brilliantly blocked by Ryan.

Limerick mounted an attack on the back of that and they almost equalised immediately when Tracy’s cross from the left was met by a header from McGrath but the Drogheda No1 tipped it over well.

Then Tracy’s corner was cleared only as far as Patrick Nzuzi 20-yards out but his shot flashed past the post. Then Foley had an effort from similar distance that was comfortable for Ryan.

Early in the second half, Curran made his return to action when replacing Rainsford. But Drogheda again could have extended their advantage on 54 minutes when Foley’s fine free-kick was met by McNally but Ryan got down smartly to turn the header up and over the bar.

On 69 minutes, Limerick could not have gone closer when Hughes played in Duggan whose first touch left him with time to shoot but his effort went agonisingly past the post.

At the other end, Daire Doyle’s stinging shot was well pushed away by Ryan, with O’Brien driving the follow-up wildly over. Then McManus entered for his club debut in place of McGrath.

Soon after, the game could have been over when O’Brien got in behind the home defence but Ryan again produced a wonderful save to deny him.

The lights went out on 79 minutes, leading to a near ten-minute delay. When play resumed, Limerick went close with a Tracy free-kick around the wall that Ryan got down to push away. Then McManus had the ball in the net but he was ruled offside.

Deep in injury-time, Samuel Oji just failed to connect properly with the ball after a long Gaffney throw-in as Limerick lost for the second time this year.