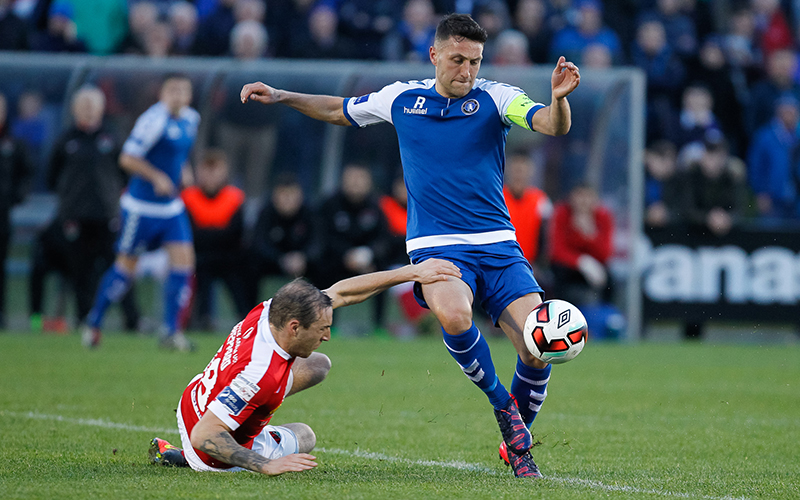 Captain Shane Duggan’s unstoppable early strike was cancelled out by an equally stunning effort from Barry McNamee as Limerick and Derry City battled out a 1-1 draw at Maginn Park in Donegal on Tuesday night, where the Shannonsiders extended their unbeaten league run to four games.

Audio Reaction: Listen to manager Willie Boland’s thoughts on the game, below.

Limerick were ahead inside the quarter-hour as Duggan skipped by a Derry player outside the box and unleashed a wonderful left-footed drive to the corner of the net.

After the visitors held onto that lead until the break, Derry started the second half at a fast pace and put the Limerick defence under serious pressure. Still, it took a free-kick of the highest quality to peg them level on the hour as McNamee curled a wonderful 25-yard free-kick past Brendan Clarke.

The Blues almost restored their lead shortly after when Lee-J Lynch’s left-wing delivery was met by the head of Rodrigo Tosi but Ger Doherty got down well to push the ball away. Chris Mulhall was then left one-on-one after seizing on a loose ball but Doherty blocked with his legs.

With a quarter-of-an-hour remaining, it was Clarke’s turn to produce a fine save when he tipped over Ben Doherty’s dipping shot from range, before Tony Whitehead put in a point-saving block to deny McNamee a second late on.

Derry had the first real opportunity of the evening on seven minutes when they were presented with a free-kick just outside the box but, with McNamee also standing over it, Lucas Schubert shot well off target from the promising position.

And, soon, Limerick were in front. Tosi laid the ball into the path of Duggan who took a touch past his opponent and shaped for a shot which flew past Doherty in the home goal.

While Derry were enjoying plenty of possession, it was Willie Boland’s side that threatened again on 20 minutes when Lynch cut in from the left and from the angle of the box hit an effort which drifted just past the far post.

On 34 minutes, a Derry free-kick was cleared only as far as McNamee on the edge of the area and he curled a shot just over Clarke’s top right-hand corner. At the other end, Tosi got a sight of goal 20-yards out and his fierce strike just cleared the crossbar.

Derry started the second half brightly but Limerick were dealing well with everything thrown at them, until the hour-mark when they conceded a soft free-kick outside the box and up stepped McNamee to curl a superb shot beyond the reach of Clarke.

On 66 minutes, Limerick were almost back in front when Lynch sent in a cross from the left which was met by Tosi whose downward header was denied by Doherty on the line. And moments later Derry had their ‘keeper to thank once more as he saved Mulhall’s shot in a one-on-one.

On 76 minutes, Clarke kept Limerick level when he showed good reactions to tip over Doherty’s strike from distance. And in the dying minutes, Whitehead produced a brilliant last-ditch block when McNamee looked set to bag a late winner for the hosts.