Early goals from Adam Evans and Dean Kelly rocked Limerick as they fell to a 3-0 loss in their opening 2015 SSE Airtricity League Premier Division match against Bohemians at Jackman Park on Saturday evening.

Bohs struck inside the first seconds when a Lorcan Fitzgerald corner was flicked on and the ball came back off goalkeeper Conor O’Donnell to the waiting Evans who tapped in.

That lead was doubled on the quarter-hour mark when Evans blocked down an attempted clearance from Robbie Williams and it fell right into the path of Kelly who also had a simple task to find the net.

That left Bohs in control and, with Limerick struggling to create anything of real note, they added a third before the hour when Fitzgerald curled in a free-kick from a central position outside the box.

Limerick could have pulled one back shortly after but substitute Vinny Faherty’s lob was cleared by the covering Derek Prendergast, and in the closing minutes Dean Delany did well to get down and turn a Shane Duggan shot around the post.

For the game, manager Martin Russell handed a league debut to 17-year-old centre-half Paudie O’Connor while new signing Aidan Price joined him in the centre of defence.

But the Shannonsiders got off to the worst possible start as Bohs attacked straight away, forcing a corner. From Fitzgerald’s delivery the ball was flicked on and came off the ‘keeper to 20-year-old Evans who struck from close range. 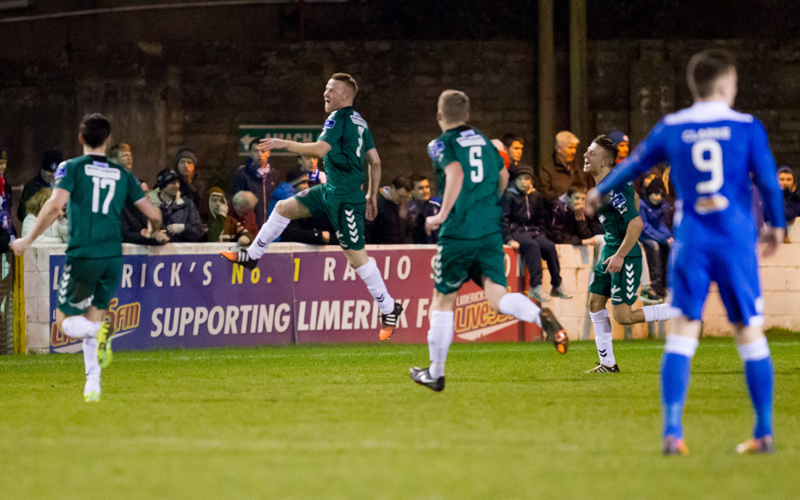 On 14 minutes, an Ian Turner corner was attacked by Duggan but the ball flew off target. And within seconds, it was 2-0 to the visitors as Williams was blocked down by Evans in the box and the ball ran across to Kelly who fired to an empty net.

Limerick were finding chances hard to come by and on 35 minutes they had O’Connor to thank as he superbly headed a Paddy Kavanagh cross clear as Kelly prepared to pounce for a third.

Three minutes later, a Turner cross was met by Ross Mann but Bohs cleared, and before the break O’Donnell got down to save a Kelly free-kick from a promising position 20-yards out.

At the break, Russell introduced Faherty and in the opening seconds he had an effort comfortably saved low down by Delany. Then Kelly fired over from the right of the box.

On 52 minutes, Turner delivered a dangerous in-swinging corner that Delany had to punch out from underneath his crossbar. But soon, it was 3-0, as Fitzgerald hit a well-struck free-kick over the wall and into the bottom corner.

On 63 minutes, after a poor clearance Delany was left stranded but Faherty’s goal-bound lob over the ‘keeper was dealt with by Prendergast.

From there, there was little of note, Kavanagh twice going close in the final ten minutes, while Duggan almost grabbed a consolation on 87 after a knockdown by Dean Clarke but Delany got down well to push his 18-yard strike behind.