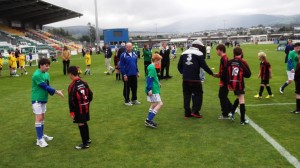 An U10 and U12 team from Limerick FC Academy ABCs group traveled to Dublin today to participate in an FAI Football for All Blitz in Tallaght Stadium. After a very successful debut blitz in Carrigaline last June, the teams played 6 games against teams from Sacred Heart, Malahide United, Skibereen this time round as well as Pat Scully’s schoolboy club Lourdes Celtic.

Games were in a 5 v 5, 6 v 6 and 7 v 7 format. This was the first National Football for All Blitz to be held in the country and was sponsored by the National Dairy Council. Around 150 girls and boys aged between 6 and 16 took part in the event and included a team from Wrexham in North Wales.

Limerick FC were the only League of Ireland club with representation at the event. Other teams from Munster included Carrigaline Utd, Tramore AFC and Cahir Park. Led by coaches Nial O’Shea and Donald Murdoch, both teams played good football and the focus was on participation from all players. A brilliant day was enjoyed by the two teams.