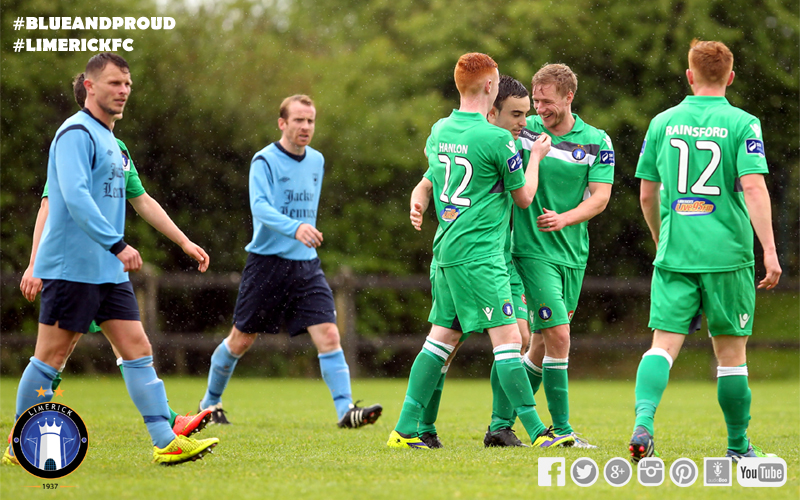 And from the off, that new-look team were on the front foot. The first shot in anger came inside five minutes when Tracy found space and from 25-yards he drove narrowly over the bar.

On ten minutes, a fine right-wing cross from Costelloe found the head of Hanlon but he could not get enough power on it to direct it goalwards. Moments later, the striker did get power behind a shot but O’Leary did well to push it away.

Then the Avondale No1 produced heroics to get down and palm clear another Tracy effort from distance. At the other end, the visitors had their first shot on 14 minutes when Karl Caulfield fired wildly over from a promising position on the edge of the box.

On 18 minutes, Costelloe provided another superb cross, this time for McSweeney who saw his header find the side-netting. Midway through the half, Hanlon got in behind for the hosts but he delayed his shot which allowed Avondale to clear.

Then a McSweeney cross eventually fell to Hughes in the box, the midfielder taking a touch before firing a low effort that O’Leary somehow got down to turn away. Then Tracy again shot over, as Limerick made all of the running.

On 25 minutes, McSweeney and Mann combined to set up Hanlon but his strike was saved by the feet of the ‘keeper.

Before the break, there were further chances as Hughes saw a shot gathered following a corner and Costelloe’s ambitious effort from range just missed the top corner. Then stand-in captain Robbie Williams saw a shot blocked in the box after an Ian Turner corner.

It was Turner who then had the next effort at beating O’Leary as he stood up to strike a free-kick from the left angle of the area but the ‘keeper again proved equal to the task, getting down brilliantly to push it behind.

Hugh O’Donovan had seen his effort comfortably gathered by Conor O’Donnell before half-time and it was Avondale who started the second period the brighter.

Still, it was Limerick that threatened first, on 53 minutes, as Tracy’s corner found Turner but when well placed his effort went agonisingly past the post.

Either side of the hour, Avondale went close. First, Simon Holland had a shot blocked just wide and then from a corner they had a header cleared off the line by Hughes.

On 66 minutes, McSweeney’s corner fell to substitute Paul O’Conor at the back post and his delivery back in was headed off target by Hanlon.

Then Avondale created another big chance as Holland found Caulfield in space in the box but as he pulled the trigger Whitehead produced a brilliant block to deny him.

On 78 minutes, McSweeney’s perfect pass was into the path of Mann and he burst in on the right of the box only to be denied by O’Leary. From Tracy’s corner, Mann headed wide.

Then a pinpoint cross from Costelloe was onto the head of O’Conor but from close in he put it off target. That looked to be the last chance of normal time, until right on the 90 when Mann was taken down in the box and up stood Tracy to coolly convert as Limerick finally found a way past O’Leary.

In regaining the trophy for the first time since 2012, Limerick also beat Leeds and Cork City along the way.