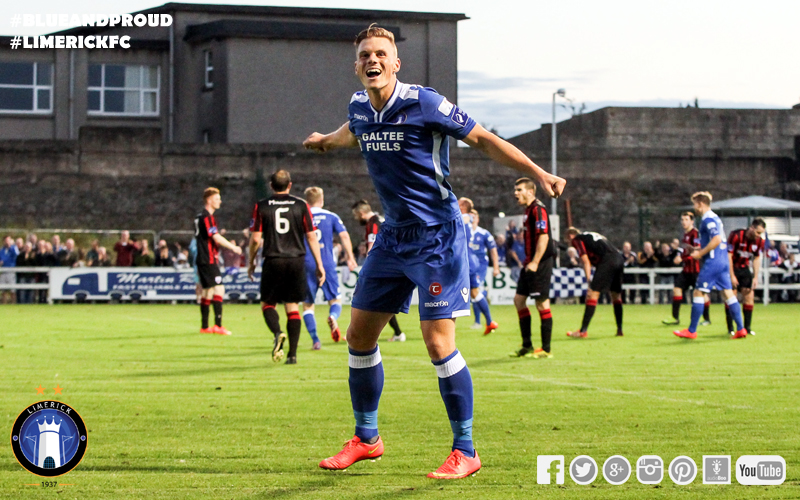 In front of over 1,600 people, the Superblues broke the deadlock with Turner’s stunning free-kick in the opening quarter-hour, before Shaun Kelly’s straight red card for an off-the-ball incident looked to have turned the tide.

However, Limerick kept going and took full advantage of a slip in the Saints defence just before half-time to double their lead through Faherty’s predatory instinct in the box.

After the interval, it got better as Dean Clarke provided the cross for Turner’s second. And while St. Pat’s pressed, they found Freddy Hall in outstanding form behind a solid defence, although there was little they could do about James Chambers’ unstoppable late consolation.

Limerick made three changes to the lineup that served up victory in Drogheda eight days earlier; Robbie Williams, Seán Russell and Darragh Rainsford were replaced by Tony Whitehead, Shane Duggan and Clarke.

And – after Morgan Langley struck wide from just outside the box – Limerick hit the front on 12 minutes. Clarke was taken down by Ger O’Brien on the left angle of the area and up stood Turner to curl a delightful effort to the top corner.

Limerick kept the pressure on and after a good move, Turner’s shot was blocked into the path of Duggan whose strike from distance whistled just past the post.

Then Limerick did well to cut out the threat of Jamie McGrath in the box, before Lee-J Lynch’s through-ball for Turner was just too strong as it ran through to Conor O’Malley.

The game turned against the home side before the half-hour when Kelly was dismissed for an off-the-ball incident, with Langley booked. The game kind of died down following that.

St. Pat’s threatened on 38 minutes when Aaron Greene robbed Duggan in the middle and drove at the box before slipping in McGrath but his strike was held by Hall. Then Hall got behind Langley’s drive from 18-yards.

But late in the half, Limerick nicked a second goal when Clarke cut in at the by-line and played a low ball which was not dealt with by Seán Hoare or Greene, with Faherty stealing it and rolling it beyond O’Malley.

The Shannonsiders were dealt a blow at the break when Lynch was forced off with an injury. However, on 49 minutes, Limerick made it 3-0 when Clarke raced down the left and lifted a cross to the back post where Turner was on hand to head in.

Close to the hour, Conan Byrne broke the offside trap but a weak effort was collected by Hall. Then O’Brien’s cross to the back was met by Greene but Hall again saved well.

On 65 minutes, Byrne’s corner from the right was met by a towering header from Kenny Browne but Hall produced an incredible save to get across and claw it away before gathering.

But with nine minutes remaining, there was nothing Hall could do about Chambers’ thunderous free-kick from a central position just outside the box. But that was as good as it got for the Saints, who fell to a fourth straight league defeat while Limerick extended their unbeaten sequence to six and moved within touching distance at the bottom.