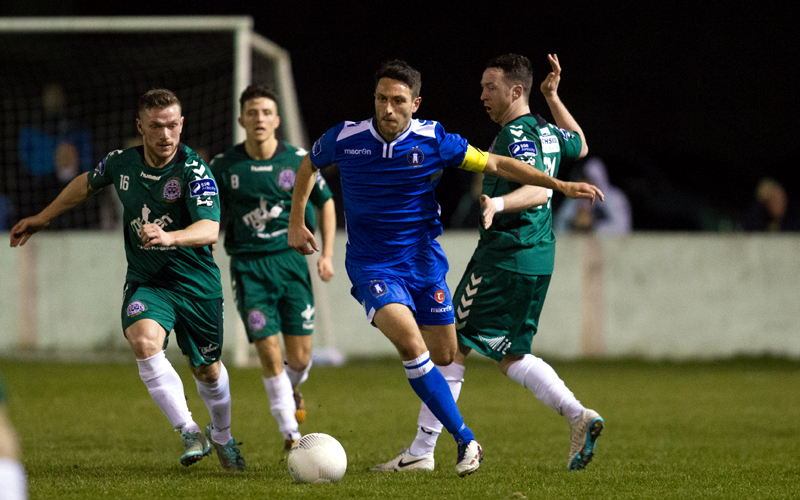 Ten-man Limerick went down to a 5-0 defeat by Cork City in their SSE Airtricity League Premier Division Munster Derby at a packed Turner’s Cross on Friday night.

Limerick had started brightly as captain Shane Duggan saw his early shot spilled by Mark McNulty but Cork cleaned up. Then the home side hit for their first, on four minutes, as Darren Dennehy finished off a corner.

Danny Morrissey should have got on the scoresheet before Cork added a second from the penalty spot through Billy Dennehy.

The visitors’ evening got worse past the half-hour when Duggan was dismissed for a tackle on Morrissey, and then Morrissey had the ball in the net from a Ross Gaynor cross but it was ruled out for offside.

Before the break, Cork found a third with a stunning long-range strike to the top corner from substitute Gavan Holohan. Soon after the interval, it was 4-0 as Billy Dennehy scored again, and then he set up the fifth for his brother with six minutes remaining.

For the game, Shannonsiders boss Martin Russell made one change to the team that had lost the league opener at home to Bohemians six days earlier as Ross Mann was replaced by Vinny Faherty.

Limerick had the first effort of the night when Duggan struck a shot from 25-yards that Cork ‘keeper McNulty failed to gather but the visitors were unable to capitalise as the danger was cleared behind.

Almost straight away, the Leesiders had the lead. Colin Healy’s corner from the left to the back post was headed back across goal by Morrissey and Darren Dennehy was on hand to finish from close in.

On ten minutes, Cork should have doubled their lead as a flowing move ended with Liam Miller teeing up Morrissey but when well placed in the box he blazed over.

However, John Caulfield’s side did not have to wait long for a second as they were awarded a penalty on 17 minutes after goalkeeper Conor O’Donnell was adjudged to have upended Karl Sheppard. Billy Dennehy stood up and coolly tucked away the spot-kick.

On a high, Cork almost extended their lead as Garry Buckley fizzed a fierce shot across goal, and midway through the half Miller should have done better from a promising position but he fired wildly over after Sheppard’s set-up.

The game turned further against Limerick past the half-hour when Duggan was shown a straight red card for a tackle in midfield on Morrissey. Soon after, Val Feeney was introduced for Faherty.

On 39 minutes, Cork thought they had added a third when Gaynor’s low cross from the left was tapped into the net with ease by Morrissey, but the linesman’s flag denied him.

Then Ian Turner’s free-kick was glanced goalwards by Aidan Price but McNulty held comfortably. Still, it got worse before half-time as Limerick conceded two minutes into injury-time, Holohan unleashing an unstoppable shot to the top corner from distance.

Six minutes into the second half, Cork scored a fourth when Dennehy finished confidently under O’Donnell from 15-yards.

On 56 minutes, Limerick had a rare effort on goal as Turner played it to Clarke whose strike from outside the box whistled wide.

As Cork dominated, Sheppard twice could have scored, his first effort going wide when the ball came quickly at him and then O’Donnell denied the former Shamrock Rovers player well in a one-on-one.

Substitute Liam Kearney also went close before the Dennehy brothers combined on 84 minutes, Darren finishing off Billy’s right-wing cross at the back post.