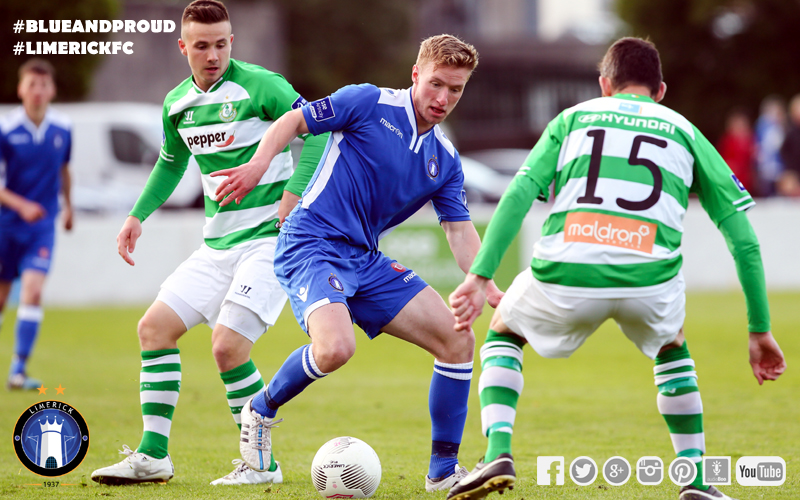 Limerick had started well and went close before the midway point of the half through Seán Russell whose strike was blocked by Mark Rossiter.

Longford then took the lead when Pat Sullivan’s wayward shot fell into the path of Salmon in the box and he drilled the ball past 17-year-old ‘keeper Tommy Holland.

Either side of the break, the home side had further chances, with Gary Shaw’s header saved, Ayman Ben Mohamed shooting just wide and the former UCD man was then well denied by Holland.

Limerick then should have levelled when Dean Clarke’s tireless work created the opening for Russell but this time his effort went off target when well placed.

Longford looked to be seeing out the game comfortably after that, the closest to an equaliser coming on 75 minutes when substitute Kieran Hanlon struck across goal. That was until the death when Paul O’Conor headed over from close in deep in injury-time.

Holland, who turned 17 at the beginning of April, was called upon for his competitive club debut. Fellow 17-year-old Paudie O’Connor was in the back four, along with 19-year-old Whitehead.

In a lively opening, Longford had a corner at one end, which was headed clear by Robbie Williams before Limerick broke through Clarke down the left, the striker getting into the box but he was blocked off by the backtracking defence.

Holland had started confidently and on the quarter-hour he came out to collect a Salmon cross, after Stephen Rice’s clever flick and Kaleem Simon’s surging run had opened up space down the right.

On 20 minutes, captain Shane Duggan picked out Darragh Rainsford on the left of the box with a fine pass and he took a touch past his defender before pulling the ball back to Russell whose goal-bound strike was blocked by Rossiter.

And soon, Longford hit the front. The initial attack which saw Ben Mohamed feed Kevin O’Connor down the left of the area was cleared by Shane Tracy.

The ball came back out to Sullivan whose off-target strike was blocked and controlled by Salmon, who had time and space to blast past Holland despite the best efforts of the ‘keeper.

Before the break, O’Connor’s delivery from the left was met by Shaw who rose above Williams but his header was held by Holland.

On 47 minutes – after Ian Turner’s corner was cleared – Longford broke at pace and O’Connor picked out Ben Mohamed who, with just the ‘keeper to beat, hit the side-netting.

Moments later, he was in again but was brilliantly denied by Holland from a tight angle. After a bright start from Longford, Limerick went close on 51 minutes when Clarke raided down the left and got to the by-line before pulling it back for Russell who struck high and wide when well placed to find the target.

On 67 minutes – after a spell where Limerick had come back into it – Longford again almost doubled their advantage when O’Connor’s cross from the left was met by Shaw in the six-yard box but he headed over from close in.

On 75 minutes, Limerick broke from a dangerous free-kick and Duggan played it out to Hanlon on the right and he took on Martin Deady before driving a strike that was going wide but Paul Skinner made sure.

Another 17-year-old, Seán McSweeney, was then thrown into the action and after he went close when in an offside position, Limerick almost equalised at the death but O’Conor headed over when well placed.