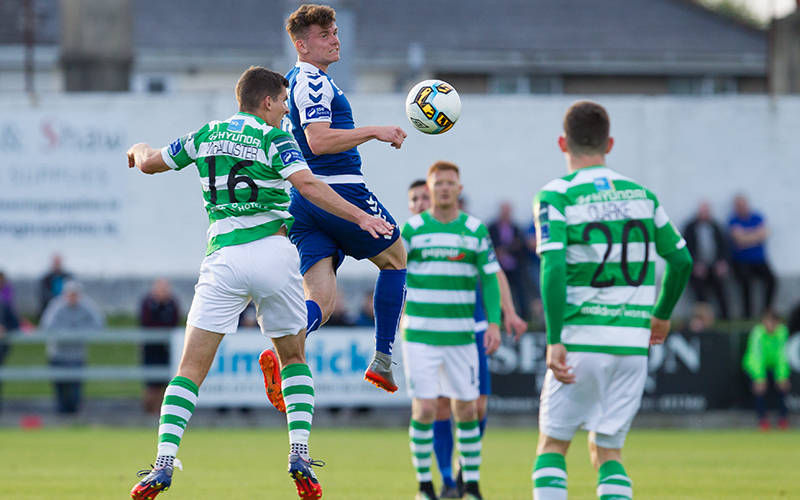 Goals in either half from David McAllister and Ronan Finn saw Shamrock Rovers run out 2-0 winners over Limerick in the SSE Airtricity League Premier Division at the Markets Field on Tuesday night.

Limerick could have been ahead inside the first minute but Dean Clarke drove over from inside the area. Then it was Rovers’ turn as Brandon Miele’s fierce strike was well saved by Brendan Clarke, before James Doona whistled a drive inches past the post.

Lee-J Lynch stung the palms of Tomer Chencinski on the half-hour with a long-range strike. But by the interval Rovers were ahead as Miele’s corner was powered to the net by McAllister. The win was secured after Finn’s strike on the hour as Limerick struggled to find a way back into the game.

And the Shannonsiders should have been in front after just 21 seconds. Limerick gained possession from the kick-off and drove at the Rovers defence as Berki and Chiedozie Ogbene combined to set up Clarke on the right of the box but from a promising position he drove over.

Rovers had their first opportunity from their opening corner on 11 minutes when skipper Finn took a short one to the near post, the ball passed back to Miele who, from the right angle of the box, drove a powerful strike which Clarke smartly got down to push away. From close in, McAllister’s follow-up was weak as he lay on the ground.

On 22 minutes, Stephen Bradley’s side went close again when they raided down the left, Doona cutting in from the left and finding space 20-yards out before driving powerfully inches past the post.

Before the half-hour, Lynch tried his luck from all of 30-yards as it opened up for him and his powerful drive was pushed away low down by Chencinski.

However, Rovers did lead by the break as Miele’s corner on 41 minutes was met by a bullet header from the unmarked McAllister from eight-yards. Indeed, Miele could have added to that advantage but Clarke got down well to push his strike around the post.

Rovers went on to dominate the second half and their pressure paid off on 59 minutes when Limerick failed to clear a ball into the box and Finn picked it up before clinically placing it in the bottom corner.

In front of 1,234 at the Markets Field – after Gary Shaw had a shot saved by Clarke – Limerick went close to getting back into the game when Lynch’s free-kick delivery from the left was onto the head of substitute Rodrigo Tosi who flashed an effort agonisingly past the top corner.

But that was as close as the Blues went, as they now prepare for Saturday’s league visit of Bohemians to the Markets Field (kick-off 6.30pm).