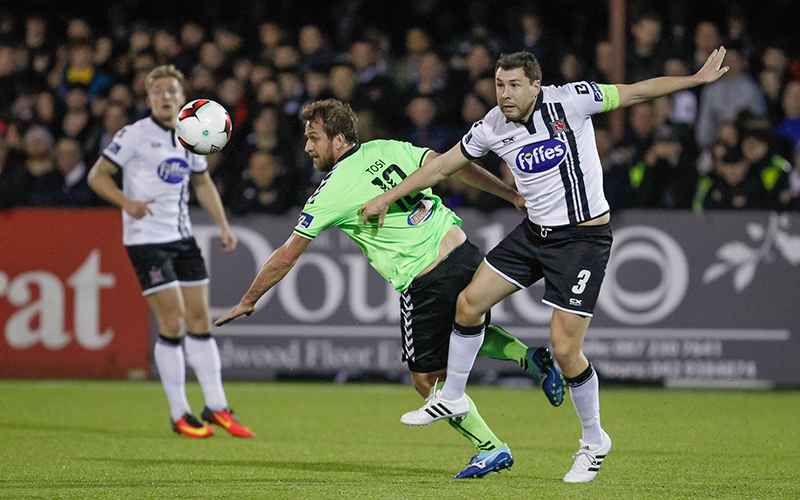 Quick-fire second-half goals from captain Brian Gartland and Robbie Benson killed off Limerick’s hopes, after Patrick McEleney produced more magic against the Shannonsiders as they went down 3-0 at Oriel Park on Friday night.

The difference of the opening 45 was that stunning free-kick from McEleney who gently floated the ball over the wall and into the top corner off the woodwork.

But the game was put to bed within 11 minutes of the restart. Firstly, Gartland headed home from close in following a fine free-kick delivery, and then Gartland provided an assist as he knocked Dylan Connolly’s corner goalwards for Benson to nod in.

For the match, Limerick manager Neil McDonald made one change to the team that lined out in the disappointing defeat by Derry City five days earlier as Stephen Kenny was replaced by Barry Cotter who played in a right-back role as Dean Clarke shifted to the wing.

There was a quiet opening to the game, with Limerick the first to threaten on ten minutes as Chiedozie Ogbene got down the right and delivered a good cross for Rodrigo Tosi which was cut out well at the near post by Seán Gannon before the Brazilian could get there.

At the other end, the ball fell invitingly for Benson just outside the box but he fired wildly over. On 24 minutes, Michael Duffy flashed a dangerous corner across the face of goal where Dundalk just failed to connect.

However, the three-in-a-row Champions had the lead on 32 minutes when they were given a free-kick 20-yards out and McEleney stood up to float a delicious effort to the far top corner, beyond the reach of Brendan Clarke.

Before the break, Dundalk could have had another. Firstly, Duffy delivered a set-piece into the box which Niclas Vemmelund got to but he got under it and headed over. Then McEleney’s pass split the defence for Duffy but McMillan was unlucky not to connect with the pull-back.

Into the second half, Duffy threatened with a fierce strike before Dundalk did double their lead when a free-kick into the area was buried by Gartland. Soon, it was 3-0 as Connolly’s corner was met by Gartland who left Benson with the simplest of tasks to head in almost on the line.

Lee-J Lynch and Rodrigo Tosi went close for the Blues, either side of McMillan almost netting for Dundalk. The Lilywhites continued to go forward in search of more goals but they could not capitlise on all their possession, as Limerick now look forward to next weekend’s FAI Cup tie in Cobh.