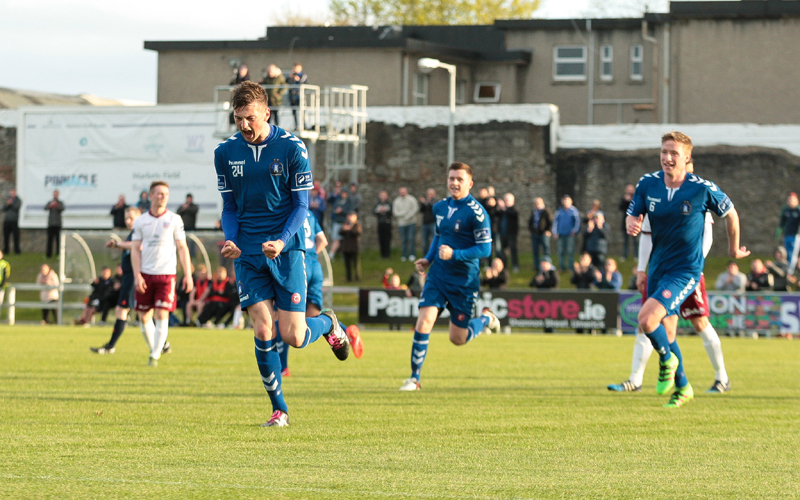 Paudie O’Connor’s first goal at the Markets Field set Limerick on the road to the EA SPORTS Cup semi-finals with captain Shane Duggan sealing their passage as they overcame Galway United 2-0 in the last eight on Tuesday night.

The Shannonsiders – looking for a 12th straight win between the league and League Cup – started brightly and should have been ahead inside five minutes but Lee-J Lynch somehow put over an empty goal.

Robbie Williams cracked the underside of the crossbar with a thunderous effort past the midway point of the half, but soon his central defensive partner buried the ball in the net. Shane Tracy’s free-kick fell kindly to him close to goal and he blasted in.

Limerick should have been more ahead at half-time but on 52 minutes they did grab a second when Seán Russell’s pass put Duggan in and a delicious finish gave ‘keeper Kevin Horgan no chance.

Galway almost reduced the deficit on 65 minutes through former Blue John Sullivan whose header was pushed onto the bar by Freddy Hall, but that was as close as they went with Limerick never seriously threatened after that.

Martin Russell made four changes to the team that lined out against Waterford United in the league 72 hours earlier. Williams returned from suspension, Russell made his comeback and they were joined by Chris Mulhall and Lynch.

And the Blues made an impressive start. Indeed, they should have been ahead on five minutes when Stephen Kenny’s cross from the right beat everyone in the six-yard box and fell for Lynch at the back post but he blazed over.

Lynch fired over again shortly after before strong pressure from the hosts led to the next opening on 19 minutes. Galway looked to have cleared the danger but Shaun Kelly picked up possession on halfway and his lofted pass was flicked on by Williams to Mulhall whose low shot was saved by Horgan.

Limerick could not have gone closer six minutes later when Williams found space 30-yards out and his fierce strike came back off the underside of the crossbar with the ball bouncing out.

But Russell’s side were soon in front when Tracy’s in-swinging free-kick from the right was knocked down in the six-yard box and O’Connor was on hand to fire in his first home and third senior goal for the club.

Galway did little to threaten in the first half but shortly before the break they had a shot on target when Ruairí Keating got in on the right of the area and his effort was fumbled by Hall as it went behind for a corner.

Kenny’s right-wing cross then almost looped into the top corner, but Limerick had to be content with just a one-goal lead at the interval.

Seven minutes after the restart, they got a deserved second. Nice interplay between Mulhall, Russell and Duggan presented the latter with the opening as he broke through the defence and supplied a delightful left-foot finish beyond Horgan.

Substitute Ryan Connolly struck over past the hour as Galway looked for a way back into the game, and they almost got it midway through the period when a long throw-in was met by Sullivan and his header was tipped onto the bar by Hall who gathered the follow-up overhead kick.

Gary Shanahan then got in on the right but he could only shoot over after Tracy did enough to put him off. On 75 minutes, Limerick almost added another after more good build-up play this time involving Kenny and Duggan to set up Mulhall but he dragged his shot wide when well placed in the box.

But it mattered little as Limerick comfortably saw out the game to advance to the last four where they face a trip to Derry City in August.

WATCH: All The Highlights