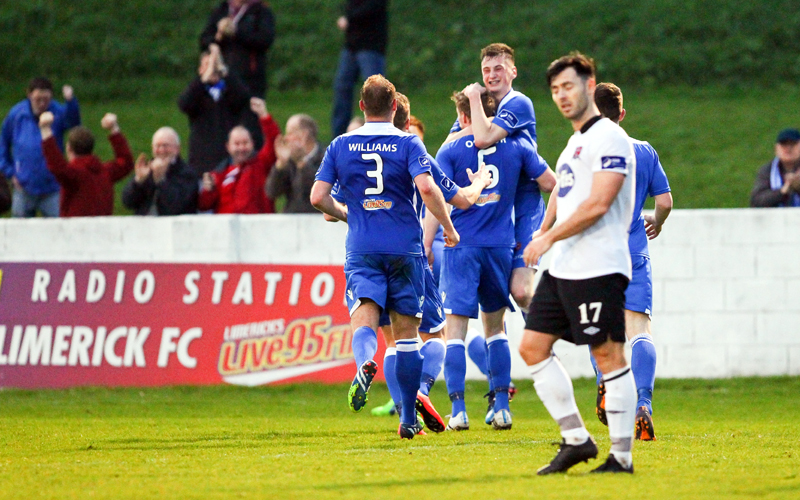 Paul O’Conor produced a last-minute equaliser for Limerick who lifted themselves off the bottom of the Premier Division table with a 1-1 draw against leaders Dundalk whose 100 percent record came to an end at Jackman Park on Saturday evening.

Dundalk began well but it was Limerick who were the first to seriously threaten, visiting skipper Andy Boyle recovering well to block off Dean Clarke’s attempt and then Paudie O’Connor headed wide from a corner.

Past the midway point of the first half, Ronan Finn should have done better when given space to shoot but he drove wide. But before the break, Richie Towell struck for the lead goal with a superb strike to the top corner.

Limerick responded well to that and they perhaps should have been level past the hour mark when Clarke got the better of substitute Paddy Barrett but he was denied by ‘keeper Gary Rogers.

But the Shannonsiders did get their just reward at the death when Darragh Rainsford’s throw-in was flicked on by O’Connor to O’Conor and he headed past Rogers from close in. Conor O’Donnell then saved well from Finn in injury-time to ensure a well-deserved point for the hosts.

Manager Martin Russell made one change to the team that lined out in the defeat by Saint Patrick’s Athletic seven days earlier as Jason Hughes returned in place of Rainsford.

Leaders Dundalk started brightly and had an early corner that was eventually fired wildly over by Daryl Horgan. Before the quarter-hour, Finn looked to have got in behind but the flag was raised in a close call.

Then it was the turn of Limerick to threaten, as Clarke bore down on goal but Boyle recovered well to block his strike behind. Moments later, O’Connor flashed a header off target from an Ian Turner corner. 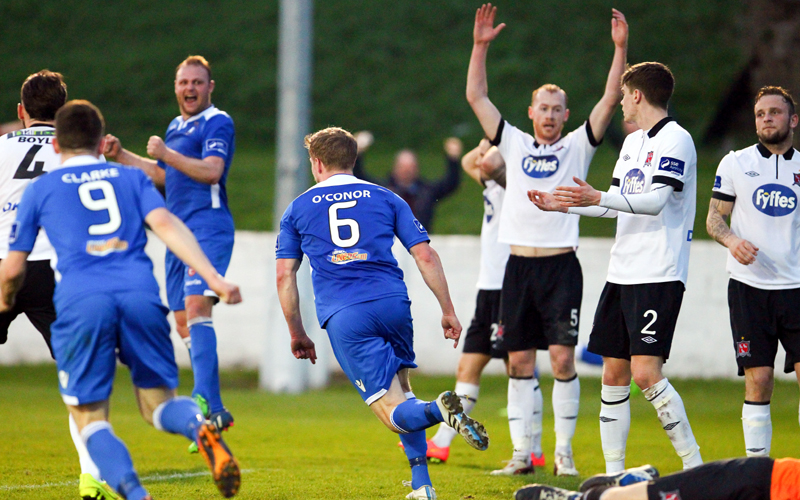 On 24 minutes, a poor clearance left Finn with space to shoot from outside the box but he drove wide.

In an even first half, Dundalk broke the deadlock seven minutes before the break when a free-kick into the box was only cleared as far as Towell who curled a wonderful effort to the top corner, leaving O’Donnell rooted.

Towell and Chris Shields both had shots saved before the interval, where visiting boss Stephen Kenny was forced into a change at the centre of defence as Barrett replaced Brian Gartland who had been struggling with flu during the week.

It was a quiet start to the second half, but on 61 minutes Limerick were in on goal when Clarke got past Barrett but from a tight angle he was denied by Rogers who pushed the ball wide.

On 76 minutes, O’Donnell kept his side in the game as he pushed Darren Meenan’s strike behind, and then he saved from Finn.

Rainsford was introduced with just three minutes remaining and he made an instant impact as Limerick levelled in the dying seconds. The 20-year-old’s throw-in from the left was flicked on by O’Connor and O’Conor was on hand to head past Rogers from close in.

Still – with three minutes added – there was time for Dundalk to respond and they almost did when Finn’s powerful strike was stopped by O’Donnell who gathered at the second attempt with the visitors following in.

And that save signalled the end of the reigning Champions’ perfect start to the season as they dropped points for the first time in their sixth outing, a result which lifted Limerick off the bottom ahead of Sligo Rovers.