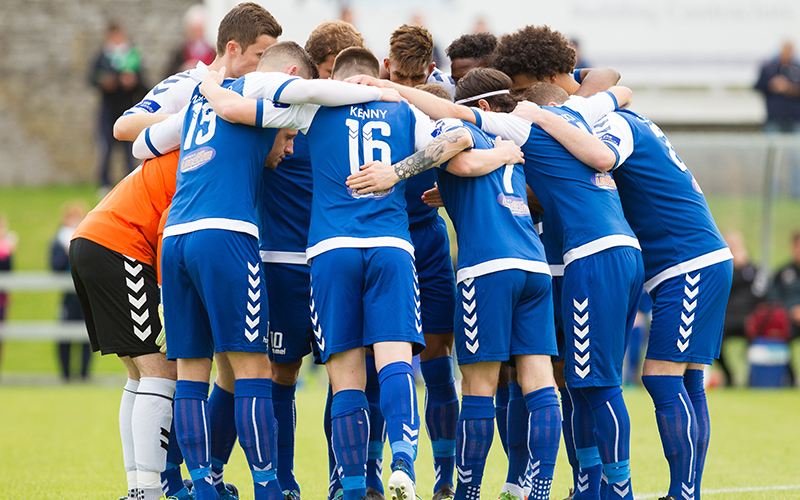 Substitute Garbhán Coughlan sprung from the bench to unlock the Finn Harps backdoor as Dave O’Connor headed Limerick into the Irish Daily Mail FAI Cup quarter-finals following a 1-0 win at the Markets Field on Saturday evening.

The only moment of note in a quiet first half was Caolán McAleer’s 23rd-minute red card after he kicked out at O’Connor off the ball, with the flow of the game not helped by a number of stoppages for treatment to Harps players.

Early in the second half, Stephen Kenny forced a save from Ciarán Gallagher, and before the hour the winger was left one-on-one with the ‘keeper who produced a brilliant block to keep it scoreless.

But Gallagher could do nothing about O’Connor’s 64th-minute header as the defender rose at the back post to meet Coughlan’s perfect cross as the Shannonsiders sailed into the last eight.

Limerick manager Neil McDonald made one change to the team that defeated Bohemians seven days earlier and it was an enforced one as Barry Cotter missed out through illness and was replaced at right-back by Dean Clarke. Under-19 winger Will Fitzgerald was included on the bench.

But the game started slowly, with little or no goalmouth action. Out of nowhere, midway through the half Harps were reduced to ten men when McAleer kicked O’Connor close to the Limerick area, with referee Anthony Buttimer dishing out a straight red card.

Following that, Bastien Héry and Chiedozie Ogbene tried their luck from distance, Gallagher getting behind the first one before the latter effort flew over the bar, as Limerick struggled to break down their stubborn opponents.

On 51 minutes, Limerick created their first real opening when – after the referee played advantage following a poor challenge on Ogbene – Kenny got a sight of goal in the box and his strike was parried away by Gallagher.

On 58 minutes, Kenny robbed possession from the Harps defence on the edge of the area which left him with just Gallagher to beat but the ‘keeper proved equal to the task, coming out to block well.

Shortly after, Fitzgerald was introduced for his senior debut along with Coughlan as McDonald looked for a breakthrough. And it was the latter that created it just three minutes later as he got to the by-line on the right and stood up a cross for O’Connor to power in at the back post.

And, that was enough to see Limerick through as they comfortably played out the final half-hour – Coughlan going close to a late second as Gallagher turned his long-range drive around the post – to keep their FAI Cup dream alive.