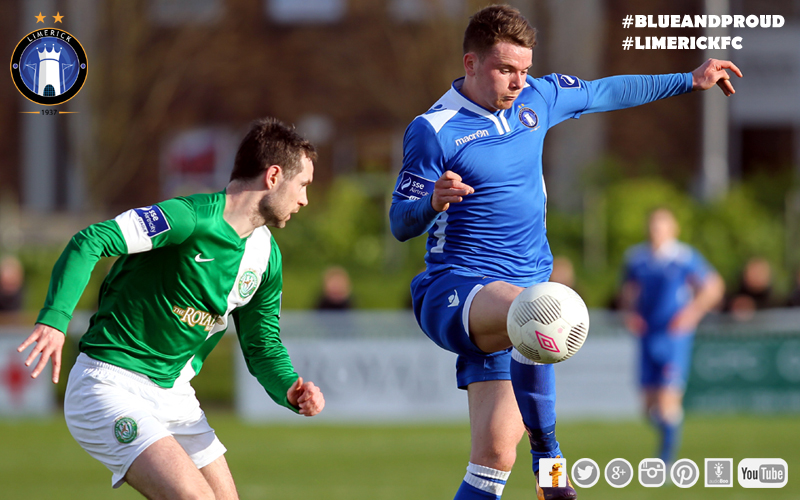 Chris Lyons’ quick-fire second-half brace stunned Limerick as they exited the FAI Cup at the second-round stage despite a promising performance in parts, falling 3-1 to Bray Wanderers at the Carlisle Grounds on Friday night.

Bray started brightly and soon had the lead as Graham Kelly’s free-kick was volleyed to the net by captain David Cassidy on seven minutes.

‘Keeper Tommy Holland kept Limerick within touching distance moments later when he denied Peter McGlynn in a one-on-one. And the Shannonsiders then levelled on 15 minutes as Dean Clarke headed in Ian Turner’s corner.

Limerick pushed on from there in the remainder of the half, and although Bray had a couple of efforts saved it was the visitors who threatened more, through Clarke again, Kieran Hanlon and Seán Russell.

Hanlon should have given Limerick the lead at the beginning of the second half when Clarke put him through on goal but in a one-on-one he shot wide.

However, past the hour mark, Bray pulled ahead with two quick goals from Lyons, the first a powerful finish and the second a lob that just had enough on it to get past Holland, as the Seagulls progressed to the last 16.

Limerick boss Martin Russell made one change to the lineup from Longford the previous weekend as Hanlon came in to replace Darragh Rainsford. Holland, 17, retained his place ahead of the fit-again Conor O’Donnell.

Bray – who made one change from their draw at Bohemians, as Adam Hanlon made way for Luke Gallagher – threatened inside two minutes after breaking, McGlynn slipping in Gallagher whose strike was deflected over by Tony Whitehead.

But the home side were soon in front as Kelly’s free-kick from close to halfway was met by a sweet volley by Cassidy from eight-yards. It could have been soon 2-0 but after McGlynn got in behind his shot was well blocked behind by Holland.

Limerick, though, were back on level terms on the quarter-hour when Turner’s corner was onto the head of Clarke at the near post and he glanced the ball to the far side of the net, for his sixth goal of the season and his fifth in cup competition.

That equaliser gave the Shannonsiders confidence but still Bray warmed the palms of Holland through a long-range strike from Lyons after a mazy run.

On 24 minutes, Limerick went close from another Turner corner which this time Clarke could not connect with properly as Stephen McGuinness collected. Then at the other end, Holland gathered a McGlynn strike.

Before the break, McGuinness was tested when Hanlon cut in on the right of the box and drove a low shot that was well pushed around the post by the ‘keeper.

Then in injury-time at the end of the half Clarke’s cross into the box caused problems for the hosts and Hanlon set up Russell whose placed effort was saved low down by McGuinness.

Limerick began the second period well and should have been ahead on 47 minutes when Clarke provided a superb through-ball for Hanlon but with just the ‘keeper to beat he dragged his effort wide.

Then Shane Tracy went on a wonderful dribble, passing four players on the edge of the area but his end effort went off target.

But the game was turned on its head past the hour mark. Bray took the lead on 62 minutes when Hugh Douglas’ low cross from the by-line was cleared into the path of Lyons who hammered to the net.

Then Gallagher was brilliantly denied by Holland who blocked a shot onto the post and wide. However, it was soon 3-1 as Lyons got in behind and despite Holland getting a touch to the lob the ball found its way to the net.

Limerick were rocked by that and despite their best efforts to come back into it, the best they could create was from a corner which was blasted over by Clarke on the turn, as they were left to concentrate on their league campaign.