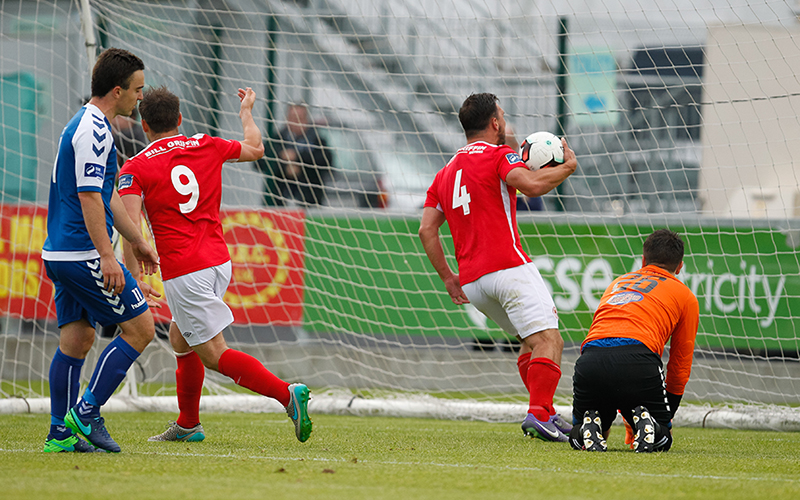 Limerick surrendered a two-goal lead as they were pegged back by Saint Patrick’s Athletic in a topsy-turvy 2-2 draw at the Markets Field in the SSE Airtricity League Premier Division on Saturday evening.

Limerick soaked up some pressure from the visitors and then struck on a lightning break past the quarter-hour when Lee-J Lynch played through Chiedozie Ogbene who carried the ball from halfway before coolly slotting to the net.

While St Pat’s were enjoying plenty of possession they were finding it hard to create anything of note, although they forced a number of corners. Limerick, though, were dealing with everything thrown at them and could have been further ahead at the break, Rodrigo Tosi and captain Shane Duggan going close.

Limerick survived a let-off early in the second half after Christy Fagan looked certain to score, before they hit the woodwork. But the Blues struck another sucker-punch on the hour when Tosi was fouled in the box and the Brazilian stood up to convert a brilliant penalty.

But Limerick were caught cold just three minutes later when JJ Lunney’s cross was headed in by Ian Bermingham, and the sides were level on 74 minutes when Conan Byrne rifled an unstoppable 20-yard free-kick to the top corner.

St Pat’s looked the more likely to go on and collect three points but it was Limerick that almost snatched it at the death, firstly Dean Clarke’s long-range drive being pushed away by Conor O’Malley who produced more heroics seconds later to tip over Ogbene’s header.

Manager Neil McDonald had made two changes to the team that lost out in the Munster Derby eight days earlier, as Shaun Kelly and Shane Tracy came in to replace Tony Whitehead and Bastien Héry, in a 4-4-2 formation as Duggan returned to midfield.

After a very quiet opening 15 minutes where St Pat’s owned possession, it was Limerick that had the first effort on goal when Tracy whistled a 25-yard free-kick just past the upright. 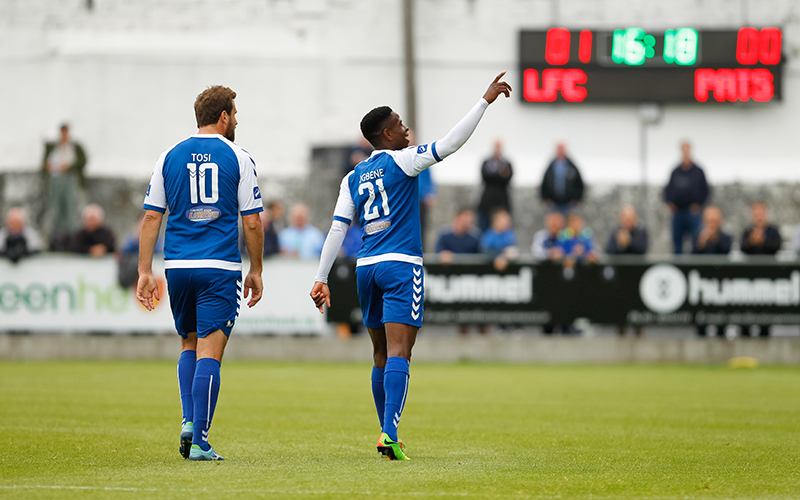 Chiedozie Ogbene salutes the North Stand after giving Limerick a 17th-minute lead at the Markets Field.

Two minutes later, the Shannonsiders hit the front. Brendan Clarke did well under his own crossbar to punch Bermingham’s corner clear, Lynch getting possession on the left wing before sending Ogbene clear just past midway, the young forward keeping his cool to run in and slide the ball beyond O’Malley’s outstretched leg.

It should have been 2-0 past the midway point of the half when Lynch got to the by-line and lifted a cross into the six-yard box where Tosi headed over from close in when it was Dave O’Connor just behind him that appeared perfectly placed.

On 26 minutes, Paul O’Conor did brilliantly to clear off the foot of Fagan who looked ready to pounce on Conan Byrne’s delivery after good build-up from the Saints. Before the break, Limerick went close again when Shaun Kelly’s pass found its way to Duggan who skipped by two defenders and hit a low shot which O’Malley gathered at the second attempt.

St Pat’s should have been level on 52 minutes when Darragh Markey’s cross from the right of the six-yard box appeared to be a tap-in for Fagan but somehow Limerick survived as Clarke gratefully collected.

Then Byrne saw a shot touched into the side-netting and from the resulting corner the ball struck the woodwork. Another corner followed and Bermingham met it well but his header flew narrowly past the upright as Limerick lived on the edge.

But Limerick made it 2-0 on 60 minutes when Tosi was fouled in the area by Peers and he made no mistake with the spot-kick to take his tally for the season to double figures.

But the hosts fell asleep as St Pat’s reduced the deficit shortly after, Lunney’s left-wing delivery being glanced to the net by Bermingham. On 74 minutes, it was 2-2 as Byrne drove a magnificent free-kick to the top corner from the D.

McDonald introduced Bastien Héry and John O’Flynn in a bid to win the game, and Limerick went close to bagging victory when Clarke’s powerful strike from distance was pushed away by O’Malley who earned his team a point with a superb save from Ogbene’s header moments later.