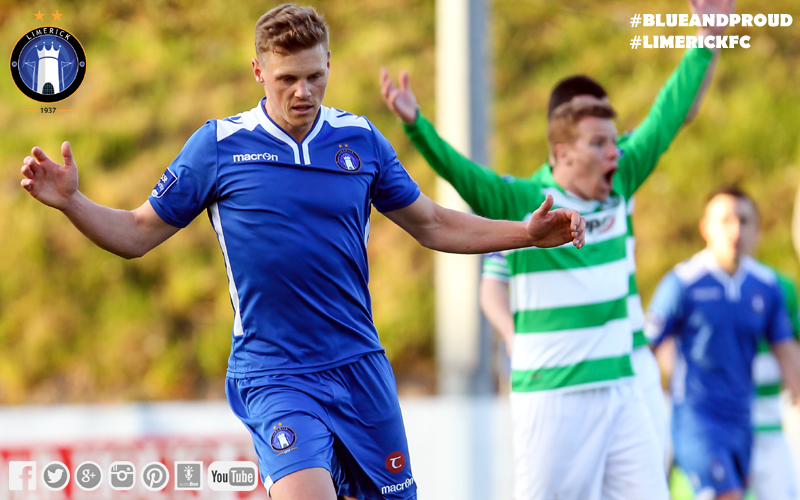 Stephen Rice’s 71st-minute header meant Limerick had to settle for a share of the spoils with Longford Town as they drew 3-3 in the SSE Airtricity League Premier Division in front of 1,779 people at the Markets Field on Monday night.

The Shannonsiders had a dream start and led by two goals inside the opening 18 minutes through Ian Turner and Shane Tracy. But by the break, it was a level game as Longford netted through Rhys Gorman and Mark Salmon.

Gary Shaw found himself in on goal early in the second half but a poor effort was saved. At the other end Lee-J Lynch’s cross was headed over by Dean Clarke.

Limerick retook the lead past the hour-mark when captain Shane Duggan picked out Robbie Williams and his header found the bottom corner. Then Clarke was somehow denied by Paul Hunt in the visiting goal.

And the Midlanders grabbed another leveller shortly after when Conor Powell’s free-kick was met by Rice’s looping header, as Limerick were forced to settle for a point, their three-game winning streak coming to an end.

Manager Martin Russell stayed with the same team that won in Cork three days earlier, and they made a bright start. On six minutes, Seán Russell found Clarke who cut in from the left of the area and his low cross was blocked away by Hunt.

Then Paudie O’Connor headed over from a corner, before Limerick took the lead on the quarter-hour mark, when Turner robbed possession and turned past his man, driving a powerful shot to the net.

Moments later, he was almost in for a second when Vinny Faherty controlled brilliantly and slid a through-ball into the path of the Cork man but Hunt came out quickly to clear.

But it was soon 2-0 when the ball was cleared only as far as Tracy outside the box and he struck an unstoppable effort to the roof of the net.

At the other end, Ayman Ben Mohamed’s cross from the left picked out Shaw but his header was collected on the line by Freddy Hall. The visitors then had a couple of free-kicks in dangerous positions but the wall got in the way of both efforts.

On the half-hour, Russell won possession inside the Longford half and drove a low shot that Hunt gathered at the second attempt.

Then Longford pulled one back when Ben Mohamed’s corner was met by Gorman whose header nestled in the far bottom corner.

On 34 minutes, the hosts should have restored their two-goal cushion when Turner showed good feet on the right and sent in a cross that Faherty headed over from close in.

And before the break, Longford levelled when a defensive mistake allowed the opportunity fall to Salmon whose low strike went under Hall and into the net with three players back-tracking.

Early in the second half, Shaw found himself through on goal but a weak effort was easy for Hall.

On 55 minutes, Limerick should have been back in front after good pressure which ended with Lynch’s delicate delivery finding Clarke but he headed over when well placed in the box. Then Paul O’Conor’s deflected strike from 30-yards flew just wide.

Limerick were hit with a blow when Lynch was forced off on the hour-mark through injury. But the Shannonsiders were ahead on 62 minutes when after strong pressure Duggan’s cross was met by a wonderful header from Williams.

It should have been 4-2 soon after but Hunt somehow denied Clarke’s header, and then Faherty volleyed over after superb football between Clarke and Turner.

But Longford were level again on 71 minutes when Powell’s free-kick into the box was met by a looping header from Rice with the ball finding its way over Hall.

Then O’Conor rifled a shot over after Faherty’s set-up while Williams shot over. But despite strong pressure in the closing minutes, Limerick could not find another lead goal, as they fell six points behind Sligo Rovers at the bottom.