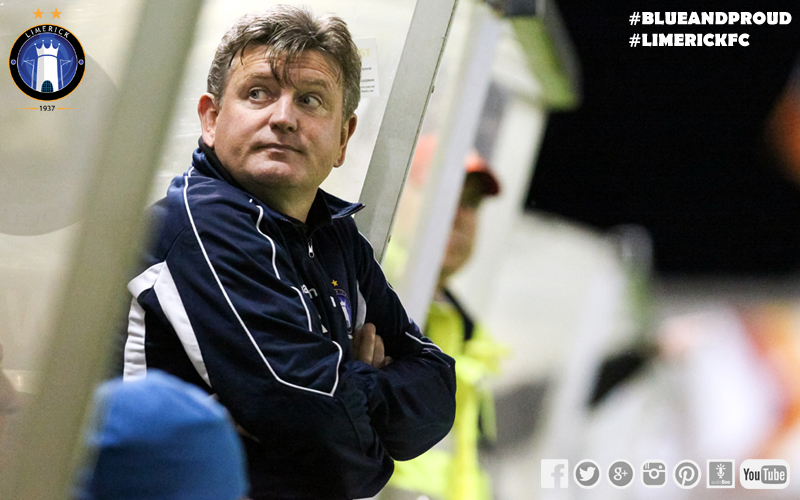 Derry City confirmed their SSE Airtricity League Premier Division status and left Limerick deeper in trouble at the bottom as the Blues fell to a 2-0 defeat at the Markets Field on Saturday evening.

The first half was one of few clear-cut chances, with Limerick creating the best of them but Derry did enough to deny Dean Clarke and Robbie Williams.

However, either side of the hour-mark, The Brandywell club got the decisive goals as Mark Timlin blasted in from inside the box and then Barry McNamee finished coolly after raiding forward.

That rocked most of the 2,647 in the Garryowen venue, and indeed Derry could have extended their lead late on with Patrick McEleney hitting the crossbar while substitute Ciarán O’Connor was denied by Patrick Kanyuka, as Limerick remained bottom.

Manager Martin Russell stuck with the same team that lined out in the win at Galway United eight days earlier, with left-back Shane Tracy having to be content with a place on the bench after returning from suspension.

It was a slow start to the game, with Derry having the first effort on goal on ten minutes when Conor McCormack’s free-kick into the box was met by Rob Cornwall at the back post but under pressure he headed over.

Then the sides exchanged strikes from distance at each end, Shane Duggan and McEleney seeing their efforts comfortably saved by Ger Doherty and Freddy Hall.

On 17 minutes, Limerick created two big chances. Duggan’s quick free-kick on halfway opened up Derry, with Seán Russell and Vinny Faherty combining to set up Clarke who drove into the box. However, he delayed and from close in his cross was blocked behind.

From the resulting corner, Ian Turner’s delivery was flicked on by Williams at the front post and Ryan McBride cleared off the line, narrowly avoiding his own goal as he headed behind.

Then Derry, who looked very dangerous going forward throughout, broke at pace and McEleney played in Stephen Dooley on the right of the box with his low strike touched wide by Hall, although no corner was given.

On 22 minutes, Kanyuka showed confidence on the ball to step out of defence and play it to Lee-J Lynch in the middle, he in turn finding Faherty who went past a defender but a low shot flew past the far post.

Then McEleney slipped in Mark Quigley in the Blues box but Kanyuka covered across brilliantly to clear behind.

Past the half-hour, Russell and former Derry defender Shaun Kelly produced brave blocks in their own area, before Faherty cut inside McBride but fired well from a difficult position.

That was how it remained until the break but ten minutes into the second half Derry hit the front when a free-kick from the left dropped to Timlin in the box and he rocketed a shot past Hall.

On 62 minutes, it got worse for Limerick when a throw-in at halfway led to the opening and McNamee ran in on goal and slotted beyond Hall.

With 17 minutes remaining, McEleney almost made it three when his dipping effort from the left angle of the box came back off the bar.

There was a break in play late on for lengthy treatment to McEleney who was eventually stretchered off. And Derry could have added a third but Kanyuka cleared the danger after O’Connor had got the ball past the Limerick ‘keeper.

Limerick now prepare for the visit of Shamrock Rovers in their final home game of the league season next Friday night (kick-off 7.45pm).

Limerick FC send our best wishes to Derry City forward Patrick McEleney who was stretchered off late in the game.