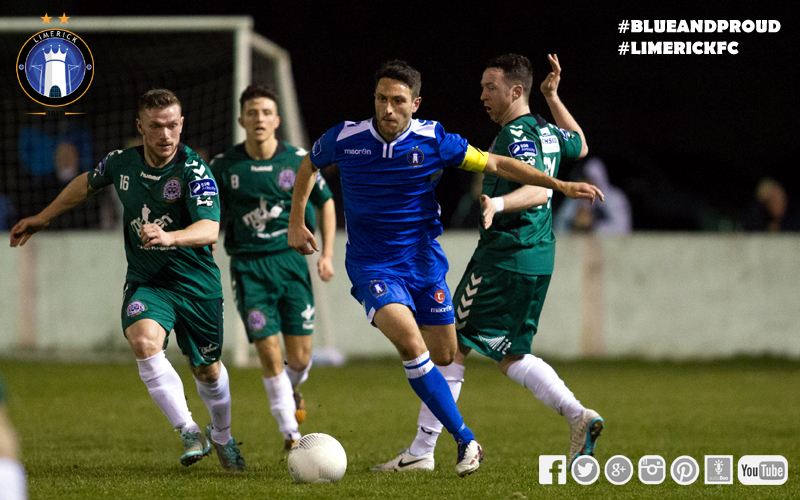 Rovers had the first opportunity of the night when Ryan Brennan’s header produced a superb save from Conor O’Donnell. But Limerick broke the deadlock before the quarter-hour when captain Shane Duggan surged into the box and netted.

It could have been better for the hosts before the break as Dean Clarke headed wide from close range after being picked out by Ian Turner’s cross. They were lucky, though, to still have the lead as Keith Fahey missed an open goal.

Into the second half, Brennan’s header this time found the net but it was ruled out for offside, before his brother Gavin struck the woodwork. Miele’s free-kick then struck the woodwork but – after Shane Tracy cleared off the line – the Rovers No20 broke Limerick’s resistance four minutes from time.

Manager Martin Russell made two changes to the team that lined out at home to Derry City four days earlier, as Jason Hughes and Robbie Williams were replaced by Turner and Paudie O’Connor.

The first chance came on ten minutes when a cross from the right was met by Ryan Brennan whose close-range header was brilliantly pushed away by O’Donnell.

Then, Limerick took the lead when Vinny Faherty fed Duggan who drove through the visiting defence and his low strike went in off the upright.

Rovers were struggling to create anything clear-cut, but past the half-hour forced two set-pieces, the first headed behind and the second put over by Luke Byrne who was under pressure.

The Shannonsiders should have doubled their advantage on 35 minutes when Turner beat Byrne down the right and crossed for Clarke but his header flashed narrowly wide.

Rovers should have been level before the break when a cross from the left fell to Fahey at the back post but he fired wide of an open goal. Then Clarke looked to have broken free but he was stopped in his tracks, as Limerick went in with the narrowest of leads.

On the hour, Rovers had the ball in the net from a Ryan Brennan header but the goal was ruled out for offside. Then the Hoops hit the woodwork through Gavin Brennan as they piled pressure on.

After Fahey’s free-kick drifted wide, Rovers hit the bar again on 70 minutes when Miele stood up for a set-piece 20-yards out. Nine minutes from time, Tracy cleared off the line after O’Donnell’s clearance dropped to Drennan.

But Rovers eventually found a way through when Danny North’s wayward shot deflected into the path of Miele and he rolled the ball past O’Donnell. Still, it was an excellent effort by the home side who ended their three-game losing streak.