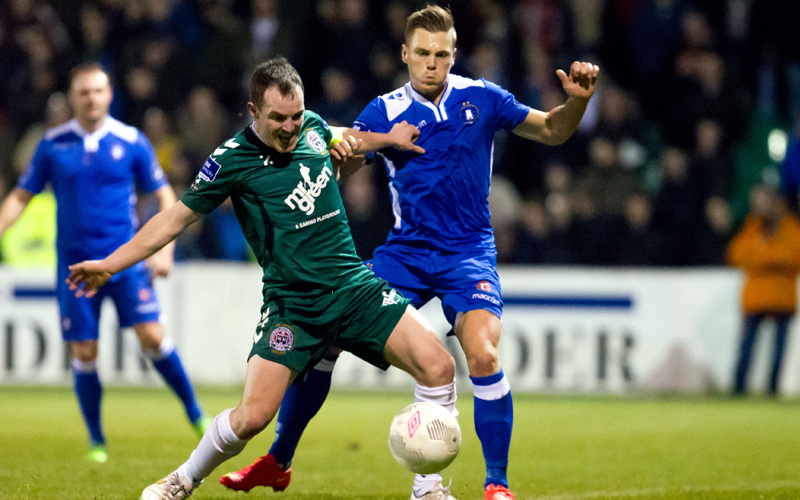 Seán Thornton’s 84th-minute free-kick denied Limerick victory as they were forced to settle for a point in a 1-1 draw with ten-man Drogheda United at United Park on Tuesday night.

There were plenty of opportunities in front of goal in the opening half, with Paul O’Conor drilling over in a one-on-one and then Daryl Kavanagh saw his shot go the same way from a more difficult angle at the other end.

Past the quarter-hour, Seán Russell’s free-kick delivery into the box was met by Robbie Williams but he failed to seriously test Micheál Schlingermann when well placed. Then Dean Clarke saw a low drive stopped.

The game turned firmly in Limerick’s favour on the half-hour when Alan Byrne was dismissed for fouling O’Conor as last man in the area, and up stood Ian Turner to coolly convert.

Still, Drogheda posed a serious threat and Conor O’Donnell produced two outstanding saves before half-time, firstly from Neil Yadolahi and then a wonder stop to deny Michael Daly’s header which was bound for the top corner.

Before the hour, the ten men should have equalised but Kavanagh headed over from close range when it looked easier to score. But after a quiet period which saw Drogheda pressure the Blues defence, and they found a way through from Thornton’s late free-kick.

For the game, manager Martin Russell made two changes to the team that played out a 2-2 draw with Longford Town 72 hours earlier as Seán Harding – who failed to come through a fitness test beforehand – and Paudie O’Connor were replaced by Shane Costelloe and Tony Whitehead.

For Costelloe, it was a first league appearance in a year, having suffered a back injury on his last outing at Saint Patrick’s Athletic on 22 March 2014. Whitehead, meanwhile, was making his first Premier Division outing since coming off the bench at UCD last September.

In a bright opening, Turner’s second-minute free-kick almost deceived Schlingermann but he caught it, while at the other end his counterpart O’Donnell raced from his box to clear and, under pressure, Limerick survived.

On eight minutes, Limerick created a wonderful opening to break the deadlock as Darragh Rainsford’s cross from the left was flicked on by Turner to O’Conor at the back post but, with just the ‘keeper to beat, he drilled over.

Then Seán Brennan’s pinpoint pass from the halfway line on the left was into the path of Kavanagh, but after being taken slightly wide his effort went inches past the top corner.

On 12 minutes, Clarke’s clipped pass in behind was just too strong for O’Conor who was breaking through, with Schlingermann grateful to gather. On 18 minutes, Russell’s floated free-kick found Williams in the box but he directed a tame header at the home stopper when in a good position ten-yards out.

On 25 minutes, good pressing from Turner, Russell and Clarke gained Limerick possession deep in Drogheda territory and the latter broke away before driving a low 20-yard shot that Schlingermann gathered at the second attempt.

As a lively contest continued to produce chances, the next fell to Drogheda as Cathal Brady’s right-wing cross was met by Brennan in the centre but he headed over when he should have done better.

But the game took a huge twist just before the half-hour mark when Costelloe played a delightful through-ball to O’Conor who was taken down in the box by last man Byrne. The referee dished out the red card and awarded the penalty which was coolly converted by Turner.

On 36 minutes, Kavanagh fired wide from distance, but Limerick had O’Donnell to thank twice in the space of a minute before the break.

Firstly, Thornton’s free-kick was onto the head of Yadolahi who forced the Shannonsiders No1 into a fantastic save as he pushed behind. Then, from Brady’s corner, he produced heroics to deny Daly’s powerful header which seemed certain to find the net.

On 57 minutes, after a quiet opening to the second half, Drogheda should have levelled when Brady’s cross from the right was met by the in-rushing Kavanagh but he headed over from close in.

Then Russell let one fly from outside the box which went narrowly off target. On 61 minutes, Clarke saw a shot deflected behind and then Rainsford headed over from a Russell corner.

On 65 minutes, Kavanagh was booked for simulation in the box as the home crowd pleaded for a penalty, and then at the other end Clarke saw another shot blocked after Turner’s low cross had found him.

Limerick were weathering a storm but they conceded with six minutes remaining as Thornton produced a superb free-kick into the top corner from 20-yards, to leave the visitors disappointed at the final whistle.