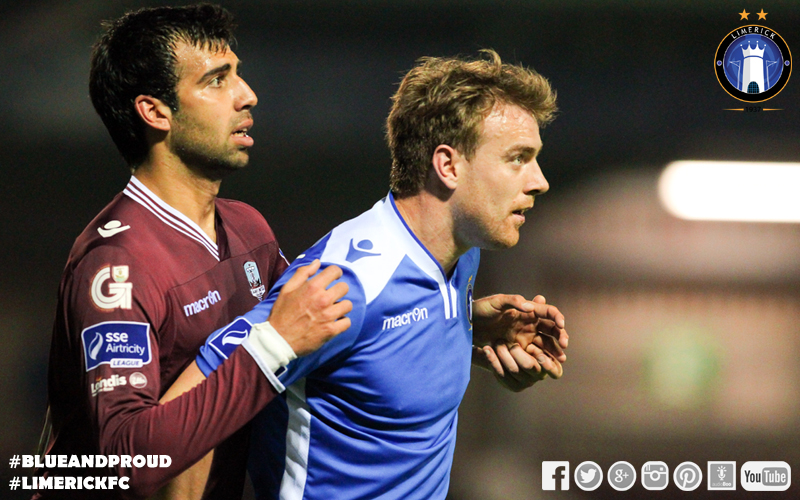 Jake Keegan’s hat-trick gave Limerick more blues as they went down 4-2 to Galway United in the SSE Airtricity League Premier Division at the Markets Field on Saturday night, with young stopper Tommy Holland a standout performer despite the scoreline.

Keegan threatened early on but Holland was equal to the task on what proved to be a busy night for the former Ardcroney man.

Limerick should have taken the lead through Paul O’Conor after he was picked out by Lee-J Lynch’s pass but he hooked the ball over Conor Winn.

Galway then broke the deadlock when Limerick man Gary Shanahan’s fantastic cross to the back post was finished off by Keegan. The Shannonsiders levelled past the half-hour when Lynch’s corner was powered home by Moycullen native Vinny Faherty.

O’Conor almost gave Limerick the lead before the break, but after the interval it was one-way traffic as Holland was called on time and time again, denying substitute Padraic Cunningham thrice – the last an incredible stop – and Keegan the same number.

Eventually, Galway found a way past when Cunningham’s cross was tapped in by Keegan, and he soon completed his hat-trick with a clinical strike. Shanahan added a fourth, while Limerick found a consolation through sub Ian Turner’s penalty.

Galway – with six wins under their belt going into the game – had the first chance of the evening when Keegan broke in behind the defence. Under pressure from Whitehead he was driven wide but from a tight angle he got a shot off which Holland dealt with well.

Limerick quickly grew into the game and they should have been ahead on seven minutes after good play involving Seán Russell and Faherty. The ball came back to Lynch whose fantastic pass picked out O’Conor’s run into the box but with just Winn to beat he hooked his effort over.

And they were made to pay for that when Galway hit the front on 12 minutes. Keegan spread the play out to Shanahan on the right and the Limerick native’s vicious low cross was on a plate for the in-rushing American to tap in at the back post.

Looking to get back into the game, Limerick saw Winn save Dean Clarke’s strike before Duggan’s effort took a wicked deflection off a Galway player and flashed just wide.

But Limerick found parity on 33 minutes when Lynch’s corner from the left was met low down by Faherty in the six-yard box and his header had enough power to beat Winn on the line.

The Shannonsiders were finding an extra gear and soon after they almost had the lead when Duggan stole possession from David O’Leary and drove a low stinging shot that Winn held well.

Then Clarke raided down the right and his low delivery was cleared only as far as O’Conor outside the box, the midfielder setting himself before curling an effort that was bound for the top corner only for Winn to get across and push it away.

At the break, Prince Agyemang replaced Lynch for his first appearance of the season after returning from Ghana. Four minutes after the restart, Keegan put substitute Cunningham through but he was denied well by the body of Holland.

The 17-year-old – who also impressed in his previous senior outings this term – then denied the young striker again after he had turned smartly in the box. Holland was kept busy, then punching Keegan’s fierce shot behind.

On 54 minutes, the Galway wave kept coming and Keegan’s low strike was pushed wide by Holland. Then the Tribesmen were almost in behind with Keegan but O’Connor produced a fabulous tackle in the box.

The Tommy Holland show continued on the hour mark when Colm Horgan’s cross was met from close range by Cunningham but somehow the ‘keeper pulled off an unbelievable save on the line.

However, Galway kept the move alive and eventually Cunningham’s low cross was tapped in by Keegan for his second of the night.

Limerick almost responded immediately when Clarke’s cross from the right went all the way to Russell at the back but his shot was deflected over by a defender.

Galway scored a third when Keegan was put through on 74 minutes and he finished confidently. They added a fourth through Shanahan’s powerful strike after a good turn in the box on 81 minutes. Moments later, Turner was taken down in the area and he converted, but it did little to cheer the 650 in attendance.