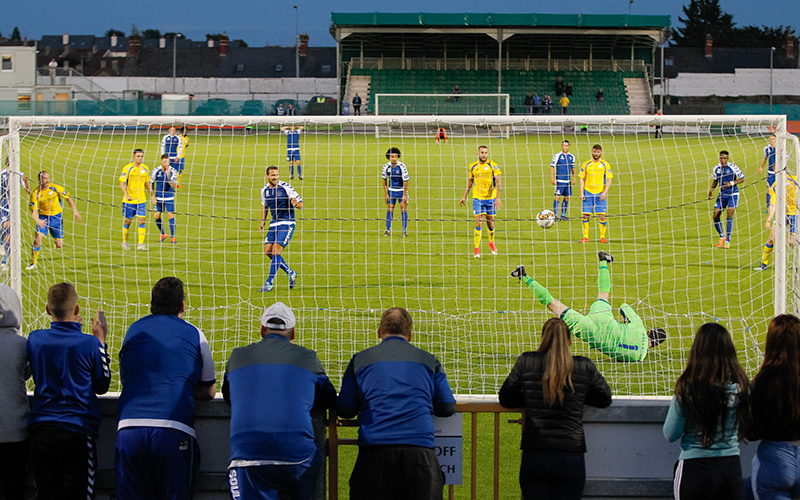 Limerick made all the running and Lee-J Lynch forced a good save out of Ciarán Gallagher at the midway point of the first half, before he provided the corner for Peter Berki to connect but the effort was cleared off the line.

Harps took the lead six minutes before the break when Tommy McBride followed in. They were reduced to ten men on the half-time whistle as Kilian Cantwell was dismissed for fouling Berki in the box, but Tosi saw his spot-kick come back off the post.

But as Limerick looked for a way back into the game, they were caught cold on 72 minutes when substitute Danny Morrissey stole in secure a vital three points for the Donegal club.

Limerick manager Neil McDonald recalled Barry Cotter and captain Shane Duggan to the lineup, and it was the home side that went on the front foot from the get-go.

The first shot in anger came on eight minutes when Bastien Héry drove over after the ball fell to him 20-yards out but, fouled as he struck it, Limerick were handed a free-kick. Lynch played it short to Tosi whose curling effort took a deflection off the wall.

On 21 minutes, Lynch’s cross into the box found Duggan who controlled on his chest and sent a dipping effort agonisingly past the top corner. Moments later, Héry played in Lynch on the right but Gallagher came out to block well.

Lynch went close on the half-hour as his strike took a touch and swerved wide, with the resulting corner from the hometown midfielder met by Berki but the ball was cleared off the line.

Then, totally against the run of play, Harps broke the deadlock. Eddie Dsane saw his shot pushed out by Brendan Clarke who could do nothing about the follow-up as McBride was there to rifle to the net from close in.

The game looked to have turned against Harps in first-half injury-time when Tony Whitehead’s through-ball was controlled well in the box by Berki who was dragged to the floor by Cantwell, a red card being shown to the defender. However, Tosi’s penalty came back off the upright and away to safety.

Limerick looked to take advantage of their extra man after the break but were finding it difficult to create openings, their first effort of the period coming past the hour when Héry struck over from the edge of the box.

But Harps doubled their lead on 72 minutes when a mix-up at the back allowed Morrissey to steal in and score, with the visitors comfortably seeing out a crucial victory – Limerick going closest through Héry’s late strike off the post.