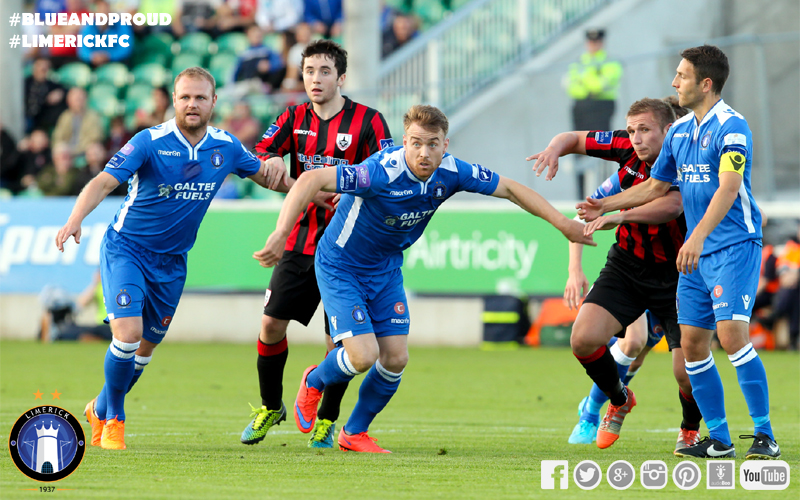 Four first-half goals sent Limerick within four points of Drogheda United at the bottom of the SSE Airtricity League Premier Division table as they made it an unbeaten August with a 4-1 win at United Park on Friday night.

The Shannonsiders were in dreamland as they led by three goals before the quarter-hour, through Vinny Faherty’s header – his fifth goal in five games – Ian Turner’s penalty and, the pick of them, Darragh Rainsford’s header.

Goalkeeper Freddy Hall got down well to deny Lee Duffy before Drogheda pulled one back through Tiarnán Mulvenna.

However, after Shane Tracy cracked the crossbar with a free-kick, Limerick made sure of the points when Robbie Williams headed in Turner’s corner at the back post.

And that killed off any chance of a Drogheda revival, with few chances during the second half – the closest coming from the hosts who saw Duffy denied again by Hall before they had a goal ruled out for offside.

Manager Martin Russell made three changes to the team that lined out in the draw with Longford Town 11 days earlier. Captain Shane Duggan, Dean Clarke and Paudie O’Connor were replaced by Shaun Kelly, Rainsford and Patrick Kanyuka.

And Limerick hit the front inside five minutes when Seán Russell’s corner found Faherty who headed in from close range. Soon, it was 2-0. The referee pointed to the spot after Williams was fouled in the box, and up stood Turner to bury it.

Drogheda were stunned further within seconds when Turner’s pinpoint cross was met by a bullet header from Rainsford. Russell then produced a fine free-kick but Micheal Schlingermann gathered.

Rainsford fired a shot from distance into the hands of the ‘keeper on 24 minutes, before Drogheda threatened for the first real time when Duffy’s low strike from just outside the box was turned around the post by Hall.

Then the home side were back in it. Duffy found himself free in the box and while Kelly produced a superb tackle to stop his shot, the ball fell to the feet of Mulvenna who buried it under Hall.

Past the half-hour, Drogheda threatened in the box but Limerick eventually cleared, with Hall doing well at the feet of Seán Thornton.

On 36 minutes, Limerick almost extended their lead when Tracy’s stunning free-kick from 25-yards crashed back off the crossbar. At the other end, Michael Daly headed inches wide after more pressure in the area.

But Limerick added a fourth before the break when Turner’s deep corner was nodded in by Williams at the back post. And they could have had a fifth when Russell’s superb cross-field pass picked out Faherty but he struck wide after the ball bounced up.

Early in the second half, Keith Treacy’s corner hit the far post after by-passing everybody. Then Tracy played in Faherty in the box but his effort did not have enough power to trouble Schlingermann.

Moments later, Hall was called into action when he tipped over Duffy’s shot from the edge of the box. On the hour, Turner got in on the right and drilled a low shot that the ‘keeper held.

Seconds later, Thornton’s corner was flicked on to Robert O’Reilly at the back post but his effort was cleared off the line. And from there, Limerick saw the game out comfortably as they made it four wins in a five-match unbeaten run.