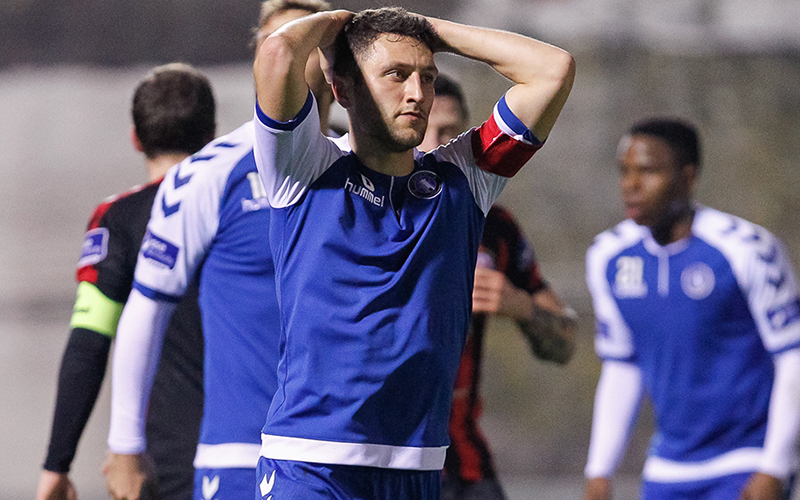 Raffaele Cretaro’s early stunner set Sligo Rovers on their way as Limerick fell to a 3-0 defeat at The Showgrounds on Saturday night, ending the Blues’ five-match unbeaten run in the SSE Airtricity League Premier Division.

Limerick got off to the worst possible start as they trailed inside two minutes, Cretaro rifling to the net from 18-yards. Kieran Sadlier struck the woodwork before Sligo doubled their advantage after Cretaro left Jonah Ayunga with the simplest of tasks.

Rodrigo Tosi brought a save out of Micheal Schlingermann before the midway point of the first half but that was the best that the Blues could come up with, and it could have been more before the break but Brendan Clarke did well to deal with a difficult shot from Sadlier.

But the points were made certain two minutes after half-time when Sadlier fired in at the back post, with Limerick unable to recover from that in what was a disappointing performance.

Limerick interim boss Willie Boland selected the same side that lined out in the draw at Shamrock Rovers eight days earlier. But they were behind within 90 seconds here as the defence failed to clear Michael Leahy’s header back across and the ball rolled to Cretaro who drilled an unstoppable shot to the top corner from 18-yards.

On six minutes, it was almost 2-0 when Sadlier got in on the left of the box and took a touch back, leaving him with a clear strike on goal but his powerful effort beat Clarke and came back off the centre of the crossbar as Limerick survived.

The Shannonsiders then had their first chance of the evening when Dean Clarke did well to get to the ball at the by-line down the right and his delivery was met by Tosi whose header went past the upright.

On the quarter-hour Ayunga was in on goal after a pass from Cretaro but his strike from a tight angle went inches beyond the far post, with a corner awarded despite it not appearing to take a touch. But disaster struck for Limerick moments later when a clever touch from Cretaro opened up the defence and left Ayunga with an empty net to finish to.

On 24 minutes, Limerick forced the first save from Schlingermann when Robbie Williams’ weak right-footed effort was touched on by Tosi and the ‘keeper got down to push it away. Tosi headed over the resulting corner.

Before the break, a powerful shot from Sadlier swerved and almost caught Clarke out but he did enough to stop it before gathering the follow-up close in from Ayunga.

Boland introduced John O’Flynn at the break but Limerick’s hopes of a comeback all but ended 70 seconds after the interval when a low cross from Liam Martin was not cleared and Sadlier stole in at the back post to tap in Sligo’s third, as the five-match unbeaten run came to an end.