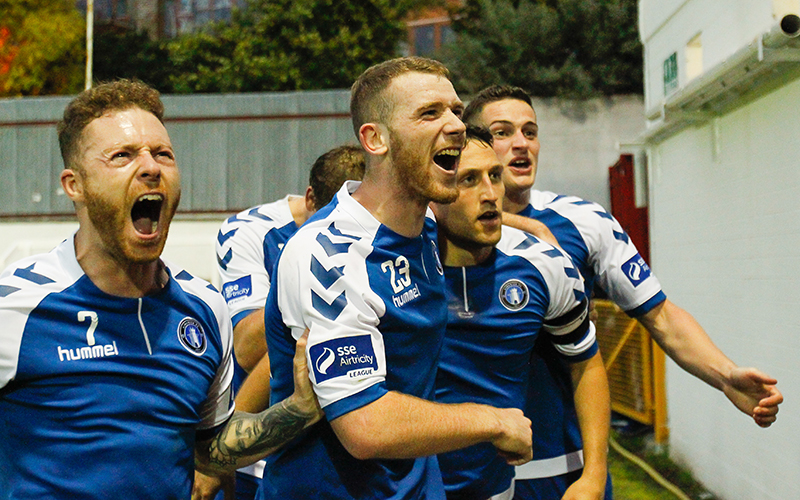 Captain Shane Duggan popped up with a delicious 95th-minute strike to rescue a precious point for Limerick who claimed the latest of 2-2 draws with Saint Patrick’s Athletic at Richmond Park in the SSE Airtricity League Premier Division on Saturday evening.

The Shannonsiders could have been ahead early on but Lukasz Skowron denied Lee-J Lynch and Chiedozie Ogbene in quick succession, before he stopped Ogbene for a second time from a more difficult angle shortly after.

Billy Dennehy did have the ball in the net for the Saints six minutes before the break but it was ruled out for offside.

There was little doubt about Chiedozie Ogbene’s stunning opener, though, as he rifled a magnificent 25-yard strike in off the woodwork just before the break. But Limerick failed to hold the lead into the interval as former Blue Paul O’Conor finished off a fine St Pat’s move with the last kick of the half.

The hosts moved ahead with 20 minutes remaining as the lively Conan Byrne struck. But there was late, late drama to come as just past the four minutes of injury-time, Limerick conjured up a piece of magic with Duggan delightfully pouncing on the ball in the box to deliver a timely leveller and priceless point.

Limerick manager Neil McDonald stuck with the same side that exited the FAI Cup in Cork eight days earlier as Dean Clarke retained his place on the right side of the defence. And the Shannonsiders started brightly, with Ogbene almost getting in behind on four minutes but Graham Kelly recovered to thwart him.

In their next attack Limerick should have had the lead when Lynch won possession deep in St Pat’s territory and hit a shot which Skowron could only palm into the path of the in-rushing Ogbene but the Polish stopper reacted well to deny him.

The Saints were also enjoying possession in forward areas and after forcing a couple of quick corners they went close when they retrieved the ball on the left, the cross back in eventually coming to Byrne 20-yards out and his fierce strike was blocked by Dave O’Connor close to goal.

In a lively opening, on 11 minutes Tony Whitehead’s pass was intended for Rodrigo Tosi but it instead ran through to Ogbene on the left of the area, the young forward getting to the by-line where his strike across goal was pushed away by Skowron. 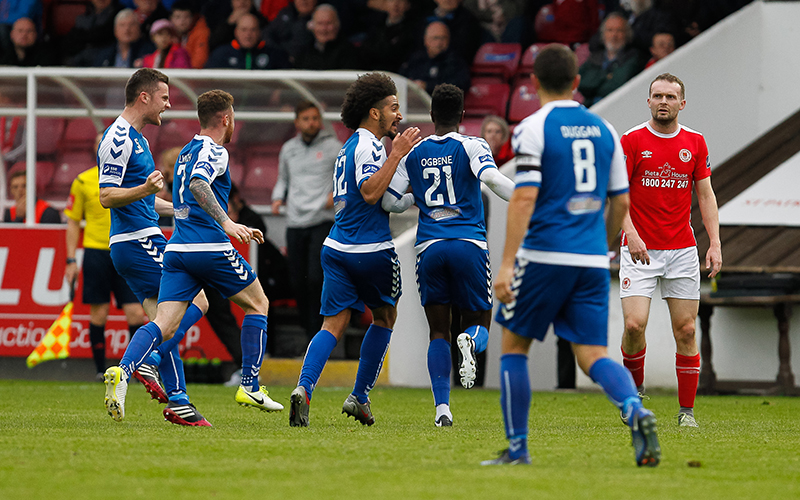 Past the quarter-hour St Pat’s put a good move together, with O’Conor and Owen Garvan combining with a neat one-two in the box but the latter’s left-footed effort lacked the pace and accuracy to trouble Brendan Clarke in the Blues goal.

After Christy Fagan headed off target from an Ian Bermingham cross, St Pat’s had the ball in the net on 39 minutes after a good move down the right with Kelly’s delivery finding its way to the back post where Dennehy tapped in, but it was ruled out for offside.

In a period of strong pressure, Byrne and Fagan went close while O’Conor also threatened, but it was Limerick that broke the deadlock on 44 minutes.

Ogbene brilliantly controlled a ball forward and found himself space for a shot before unleashing a wonder strike which went in off the crossbar, linesman Wayne McDonnell signalling that it crossed the line. However, the joy was short-lived as O’Conor levelled with the last kick of the half after picking up a pass into the box.

Barry Cotter was introduced at half-time in place of Stephen Kenny with the youngster slotting in at right-back as Clarke moved to left wing. Dennehy and Clarke traded shots at each end early in the half, before O’Conor and Killian Brennan headed over from two Dennehy corners.

St Pat’s hit the front on 70 minutes when Kelly found Byrne who, from the right of the box, drove a low shot across goal which found its way in despite the best efforts of Cotter.

Bastien Héry curled an effort agonisingly wide with a quarter-of-an-hour remaining and, with three minutes left on the clock, substitute Joe Crowe teed up Tosi in the box but he could not find the target under pressure.

When Shane Tracy’s free-kick was gathered on the line by Skowron on the 90 it looked like Limerick’s chance had gone. However, in the dying seconds of injury-time they manufactured a move with Ogbene, Cotter and Tosi involved in setting up Duggan who sent the sweetest of strikes to the top corner to earn a valuable point which keeps them two ahead of St Pat’s in the table.