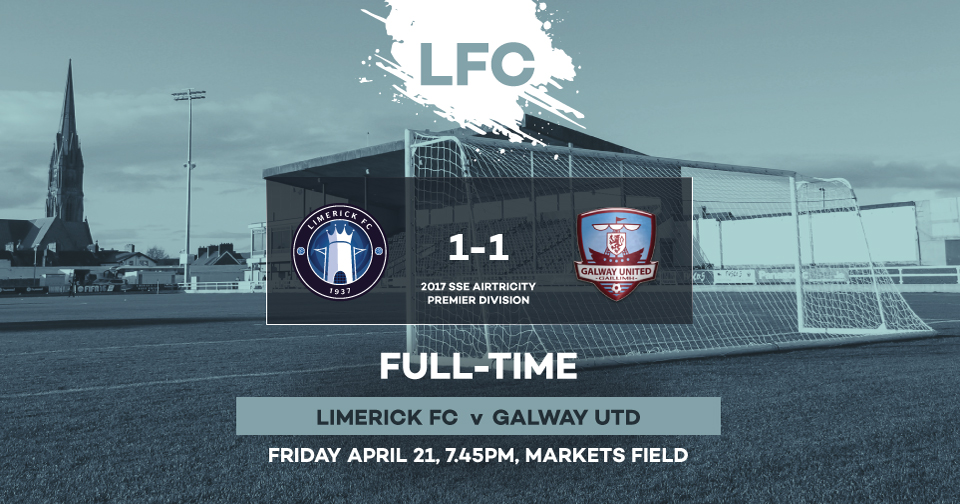 Limerick FC and Galway United played out a 1-1 draw at the Markets Field on Friday night. A Robbie Williams header was cancelled out by a stunning goal by David Cawley with five minutes remaining.

An early slip by Galway defender Lee Grace provided Chiedozie Ogbene with the first chance of the game. However, the winger was denied by the legs of Conor Winn in the visiting goal. Chris Mulhall was next to try his luck for the home side from range, but his weak shot was parried to safety by Winn.

Limerick intended on utilising the pace of Ogbene with long diagonal balls to the left-hand side and the home side almost profited from this tactic on a couple of occasions. Approaching the half hour mark, great play by Shane Duggan allowed Chris Mulhall to square the ball towards Tosi but Stephen Folan anticipated the danger to clear.

Mulhall was carving out most of Limericks half chances, benefiting from a dominant midfield performance by Shane Duggan and Lee-J Lynch. Ten minutes before the break, the goal the home side thoroughly deserved arrived. Robbie Williams rose highest to meet a floated free-kick from Lee-J Lynch to nod the ball past the helpless Conor Winn. Galway looked vulnerable defensively throughout the first-half and failed to create a clear chance.

Galway started the second- half with a purpose. David Cawley, made a rare forward run and blasted the ball across the six-yard box, but no teammate was present to grab the much-needed equaliser. Shortly afterwards, Robbie Williams flashed a right-footed effort over the crossbar following a Shane Duggan corner.

Galway’s first chance of the game fell to Stephen Folan but his long range free-kick was easily gathered by Brendan Clarke.

Limerick were searching for the insurance goal and Chiedozie Ogbene should have dealt better when played through by Tommy Robson. The lively winger blasted his effort over the bar in a promising position.

Substitute Dean Clarke almost made an immediate impact for the Shannonsiders. The former- Shamrock Rovers man pulled the ball back to John O’Flynn, who in turn laid the ball into the path of the waiting Bastien Hery. The midfielder struck his shot straight at Conor Winn. With five minutes remaining, the Markets Field was stunned as a thunderous 30-yard strike from David Cawley flew past Brendan Clarke and into the top corner of the net for the equalising goal.

The Tribesemen will be satisfied with a point from this game, even though they are still winless. Outside of speculative efforts from ex-Limerick duo Stephen Folan and Vinny Faherty, the visitors failed to trouble Limerick regularly outside of Cawley’s wonder strike. Willie Boland’s men will be disappointed with their second-half display as they retreated far too quickly which alleviated the pressure on the Galway defence which was evident in the first-half.