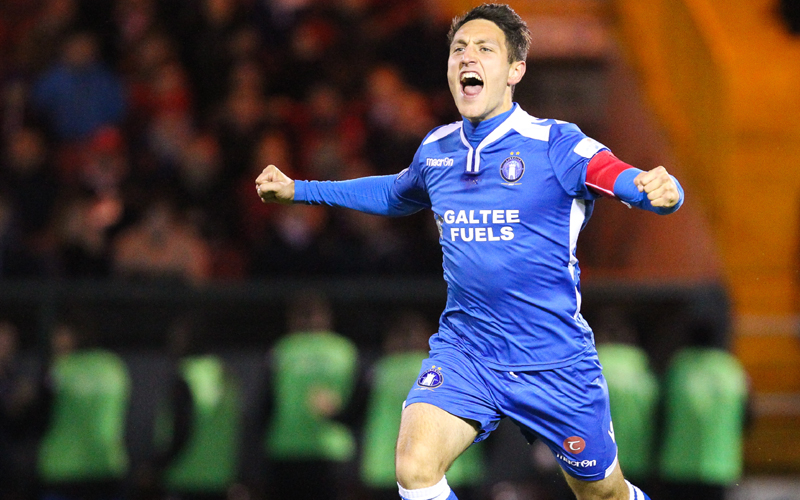 Vinny Faherty’s 12th league goal of the season was the moment that fired Limerick into the SSE Airtricity League Promotion / Relegation playoff final as they defeated Sligo Rovers 3-2 at The Showgrounds on a night of Friday frights.

The Shannonsiders got off to a dream start when captain Shane Duggan fired them in front inside five minutes, and they could have been further ahead before goalkeeper Freddy Hall superbly denied Dinny Corcoran from the penalty spot.

Limerick added a second before the half-hour through Paul O’Conor’s header after Shane Tracy’s cracking effort came back off the crossbar.

But after Hall again produced heroics to deny Sander Puri, the Estonian forward did find a way through with the last kick of the first half to bring the Bit O’ Red within touching distance.

Before the hour came the decisive moment as Faherty fired in from close range, and with the score in the Shamrock Rovers v Drogheda United match slowly changing in Limerick’s favour, it appeared the wait of 203 days to move off the bottom was finally over.

Still, there was time for more drama with Hall saving brilliantly from David Cawley late on, while Ruairí Keating’s injury-time strike meant a nail-biting final few seconds, in which Danny Ledwith almost proved the villain, his strike flying narrowly wide as Limerick secured a place in next week’s playoff against Finn Harps.

Manager Martin Russell made one change to the team that lined out in the home defeat by Shamrock Rovers seven days earlier and it was an enforced one as the suspended Lee-J Lynch was replaced by Tracy.

And the Superblues made a lightning start when Seán Russell’s short corner was played to Ian Turner who laid it into the path of Duggan and his beautiful strike from just outside the ‘D’ found the bottom corner. 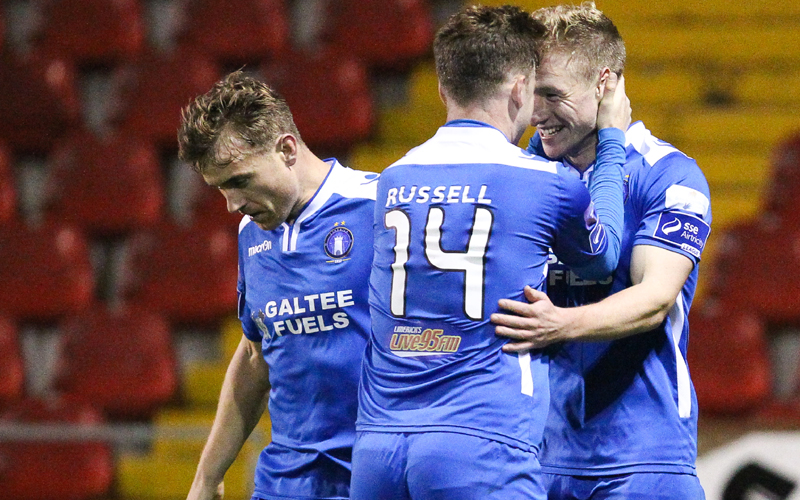 On the quarter-hour, Limerick went close to a second when Turner’s free-kick from the left angle of the box went past Faherty and ‘keeper Richard Brush did well to get down and push it away.

Within seconds, Sligo were awarded a penalty when Patrick Kanyuka clumsily challenged Corcoran in the box, but the former Bohemians man stood up and saw his low spot-kick stopped and held by Hall.

At the same time, there were two goals in two minutes at Tallaght Stadium as the teams exchanged goals, heightening tension among the Limerick support. Then Russell’s strike from 20-yards was pushed behind by Brush.

On 27 minutes, Limerick doubled their advantage when Tracy’s dipping strike came back off the bar but following in was O’Conor who had two attempts and he made no mistake with the second from close in.

Drogheda then took the lead once again in Dublin. On 36 minutes, Limerick broke well and Russell fed Faherty on the left of the area and his curling effort went inches wide.

Three minutes later, Hall produced wonders to turn Puri’s strike around the post. But with the very last kick of the half, just into the sole minute of injury-time, Puri did score after the ball fell kindly to him at the back and from 12-yards he placed the ball in the bottom corner.

Early in the second half, Keith Ward curled a 25-yard free-kick just past the upright, before word filtered through that Rovers had equalised for a second time, from the spot. 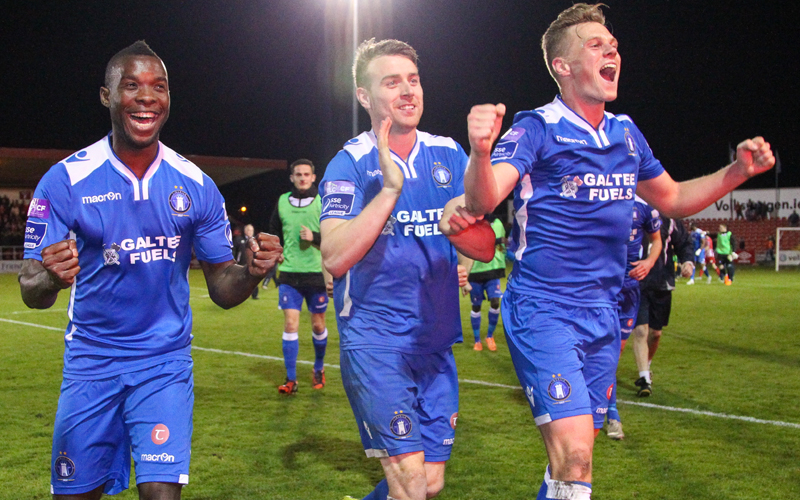 Cyril Guedjé, Vinny Faherty and Ian Turner celebrate in front of supporters at the final whistle

Two minutes later, it got better for Limerick when Faherty restored their two-goal cushion with a superb close-range finish.

The tension never left the air as eyes remained focussed on Tallaght, and eventually Rovers hit the front for the first time on 75 minutes, extending that advantage to 4-2 eight minutes later.

In between those goals, Limerick survived a huge scare as they cleared off the line following a dangerous corner, and with four minutes remaining Hall produced another crucial save to deny Cawley.

Still, there was time for late, late drama as Sligo reduced the score to 3-2 through Keating in the first minute of the three added, and right at the death they almost equalised but Ledwith’s strike after a deep ball into the box flew wide.

Limerick saw out the remaining minute comfortably and there were unforgettable scenes of joy at the final whistle with players and supporters. The Blues now prepare for the visit of Finn Harps to the Markets Field for the Playoff Final first leg on Monday night, kick-off 7.45pm. Season Tickets are valid for the game.

The return leg is in Finn Park next Friday, kick-off 7.45pm.

PHOTOS THANKS TO CONOR WYSE PHOTOGRAPHY. SEE A FULL GALLERY ON OUR OFFICIAL FACEBOOK PAGE!