Limerick defeated Athlone Town by three goals to one, in a game that the home side efficiently took in their stride, despite the scrappiness of the tie. Goals from Pat Purcell, Corrie Treacy and Jeffrey Judge ensured that Noel McGee’s strike on the hour mark was simply a consolation.

Despite a floodlight failure before the first whistle, the game went ahead due to the light returning high above the Jackman Park surface just moments before the players entered the playing area. Like the lights, neither side started brightly.

The return of Stephen O’Flynn to the Limerick side shifted Rory Gaffney to the left wing, as Barry Sheedy merited his start following his brace against Shelbourne in their recent cup tie. The long ball tactic was being utilised excessively on the opening twenty minutes, with the only being played by the visitors.

The first half chance of the game didn’t arrive until after the twenty minute mark when Rory Gaffney had a great run into the box after beating two defenders on his way. He crossed well, but the ex-Limerick player Tommy Barrett read the play, and intercepted to deny the awaiting Sheedy.

The opening goal arrived on the half hour mark. Jeffrey Judge’s jinking run caught Athlone napping, but they recovered to concede the corner. From the corner however, Gaffney swung in a great cross which seemed to be bundled in at the back post. As they wheeled off in celebration, captain Pat Purcell claimed the goal.

A second goal arrived just ten minutes later, as Jeffrey Judge doubled Limerick’s lead. As yet another corner was swung in, the ball fell to the midfielder at the edge of the box, he audaciously volleyed into the back of the net, to score a fantastic goal. This was just before half time, and the Athlone side appeared deflated.

The second half began as the first did; without really seeing any side take advantage of poor defending on both sides of the pitch. For Limerick, John Frost had to play out of position, on the right hand side of the back four, requiring himself to constantly have to turn back onto his left foot to have any real impact on the game.

As the seven hundred in attendance felt that the game was secure, Athlone struck. Limerick handed possession away in the centre of the field and Sherlock worked well down the right before crossing to the far post for Noel McGee to tap home from six yards. The ground fell silent.

Before the end, Limerick invited an awful lot pressure upon themselves. Jason Hughes often broke in search of Noel McGee, but somehow Limerick looked like holding onto their one goal lead. They would in fact, secure the tie five minutes from the end.

A hat trick of goals from corners was to be established on the eighty-sixth minute, as Gaffney swung into the danger zone once more. In what looked like a carbon copy of Purcell’s goal in the first half, Corrie Treacy converted this time. Limerick were home and dry.

As full time approached, a silence fell upon Shannonside as news of a late Monaghan winner found Limerick ears. This sets up next week’s tie with Monaghan as a make or break match for Pat Scully’s side. 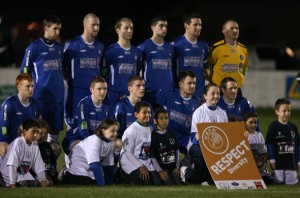