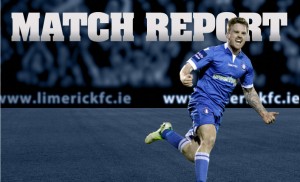 Limerick FC saved their very best for a second half which saw them dominate in form Dundalk FC and produce three excellent goals which overturned a two goal deficit. Shane Tracy, Rory Gaffney and Craig Curran were the heroes on a night which returned the Superblues to the top half of the table, and which could spur the squad onto new heights, such was the manner of the victory.

Limerick FC started brightly with Daragh Rainsford and Craig Curran linking well, but before the game had time to settle, Dundalk snatched a lead when a misplaced pass in midfield was pounced on and led to a stunning cross which Kurtis Byrne finished well. The Superblues almost had an immediate reaction when the excellent Rainsford produced a stunning chip to round off a surging run, but the ball met with the cross bar. Limerick continued to press with Galbraith causing the Lilywhite defence trouble, creating chances for Bossekota and Rainsford, the latter forcing an excellent save for Cherrie in the Dundalk goal.

Though dominating possession at this stage, the home side were dealt a sucker punch when Dundalk doubled their lead. A Dane Massey free kick took a deflection off the wall which was just enough to help it past Barry Ryan. Despite the set-back, it was the Superblues who were to create the final chance of the first half when the Dundalk defence, under pressure, cleared off their own goal-line.

Limerick FC started brightly again in the second half, but almost found themselves three nil down when a mis-hit Shaun Kelly clearance looped back over Barry Ryan, who produced one of the saves of the season to maintain the two goal deficit. Craig Curran was causing the Lilywhite defence countless problems and when, on 55 minutes he was fouled in a central position outside the area, Shane Tracy stepped up to curl a beautiful free kick home. The Superblues were staring to find space and roared on by the home support saw Curran go close. Moments later, Curran was fouled again. As Shane Tracy lined up the free kick, Stuart Taylor sent Rory Gaffney on in place of Joe Gamble, Gaffney ran straight to the far post where he met Tracy’s free-kick, scoring with his first touch a matter of seconds after entering the field.

With the equaliser secured, the Superblues continued to stream forward with Galbraith, Gaffney and O’Leary all carrying the ball at the lilywhite defence with purpose. A Galbraith cross fell to Shane Tracy, in the penalty area despite lining up at left back, he feinted and moved the ball to his right foot and struck a beautiful shot which Dundalk’s Andy Boyle brilliantly cleared with a diving header. The resulting corner was headed weakly clear and an acrobatic Axel Bossekota bicycle kick put the ball back in the area, Dave O’Leary shot, only to see his effort saved, but the rebound fell to Craig Curran who thundered home the winner.

The 1,249 strong crowd were lucky enough to witness a sensational game in Thomond Park and the manner of the victory should spur the Superblues on ahead of the visit of Sligo Rovers on Monday night [July 1st] in the EA Sports Cup quarter final.