The Munster Senior Ladies Cup is sitting in the Limerick FC trophy cabinet following a hard fought but deserved win at Brickfields (home of Nenagh AFC) over Killenaule who belied their young years with a very good display.

In an impressive overall display however two players stood out for Limerick FC – at opposite ends of the pitch. Goalkeeper Chloe Pearse made a series of great save, especially in the first half to keep her side in the game, while at the other end Danielle Sheehy’s skill, pace and movement was a constant thorn in the opposition’s side. She capped here Player of the Match performance with two goals and cracked another shot of the post that any Premiership player would have been happy with.

However it could have been a different story if Killenaule had managed to take one of the chances they created in the first period. Shauna Hayes and Katie O’Regan had good efforts on target but Pearce in the goal was equal to both.

At the other end Shauna Hanley in the Killenaule goal was also proving more than capable of what Limerick FC were producing. She saved from Clogadh Dunworth and Hayleigh Power who came forward for all set pieces and who used her power in the air to great advantage.

The Limerick girls were gradually getting g a grip on the game and took the lead on 40 minutes when Gillian Grimes set up Sheehy who finished expertly into the bottom corner. They had a penalty shout a minute later when Sheehy looked to have been fouled but referee Peter Moyles waved away the claims.

Killenaule certainly were not going to lie down and came out strongly in the second half. The game was end-to-end at this time and after clearing a corner Killenaule broke and Shauna Hayes hit the target only for Pearce to make another good save.

However they didn’t and were made to pay when the excellent Edel O’Dwyer cut in along the end line and scored a cracker from a very acute angle. So it was game on in the 66th minute!

But six minutes later Limerick were back in front: sustained pressure saw Jenni Lyttle’s shot cleared off the line with the keeper beaten, but the ball broke straight back to Sheehy who kept her cool to finish well.

Killenaule again came back, with O’Dwyer unlucky not to equalise after another good run and Michelle Maher also creating danger from midfield.

It was Sheehy who again thrilled the big crowd on 84 minutes when she latched onto a ball that was partially cleared and smacked it off the post. But it didn’t matter as Limerick FC held on to win. 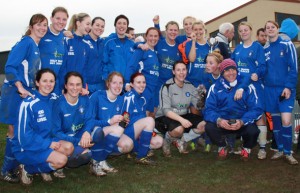