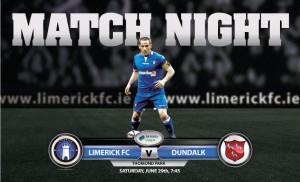 Limerick FC welcome Stephen Kenny’s Dundalk to Thomond Park on Saturday, 29th June as the Airtricity League of Ireland returns following the mid-season break. Dundalk currently lie fourth in the table in good form having won their last three games and are just six points behind St. Patrick’s Athletic, with a game in hand over the Saints.

On the injury front the news is better with the mid season break allowing some of the Superblues stars the opportunity to recover from a variety of injuries. Pat Purcell [ankle] and Steven McGann [broken foot] still remain on the long term injury list, though it is hoped that both might return to training in the coming weeks. Rory Gaffney [ankle] has seen a specialist in the past week and the results of that visit are being assessed. Craig Curran had flown to Scotland for specialist physiotherapy treatment during the break; he has responded well, is back in full training and expected to be available on Saturday.

The previous meeting between the two sides resulted in an entertaining 2-2 draw, Limerick  FC had led 2-0 with twenty minutes to go, thanks to goals from Bossekota and Kelly, but two late goals from Massey and Mulvenna rescued a point for the home side in Oriel Park.