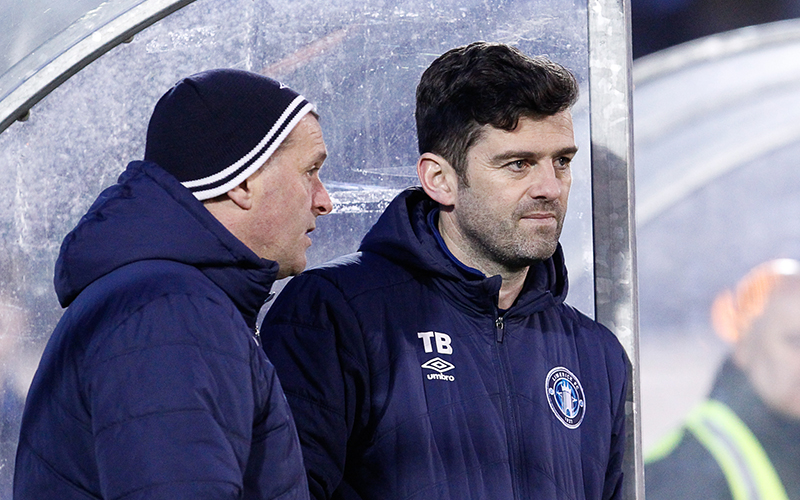 Tommy Barrett wants Limerick to show more defensive steel and “keep it tight as possible” when they face Derry City, who have already netted eight times against them this season, at The Brandywell on Friday evening (kick-off 7.45pm).

Limerick fell apart on their last trip to the venue in March, conceding four times in 11 second-half minutes as they went down 5-0, while in the reverse fixture on Shannonside the following month two late goals helped Derry to a 3-0 win.

As well as a first league success over Derry in almost four years, Limerick are also chasing back-to-back Premier Division wins for the first time in 15 months.

That is after bagging their first three points at the Markets Field in 11 attempts last weekend, seeing over bottom-of-the-table Bray Wanderers 2-1 thanks to Cían Coleman and Barry Maguire. And with that giving his players confidence, Barrett wants them to build on it.

“We had a good win over Bray and we’ll look to take that into Derry now,” Barrett told LimerickFC.ie. “Derry are a good side who have beaten us well twice.

Unlike earlier in the campaign, Limerick will now make the long journey north on matchday, leaving at 10am, but Barrett believes that will make little difference to their preparations. “I’d prefer the players getting sleep in their own beds,” he said. “We will have positive thinking going into the game.”

Limerick have not won back-to-back matches in the Premier Division since April last year, then beating Saint Patrick’s Athletic and Drogheda United.

Derry have won the last three meetings on an aggregate score of 11-0, including 5-0 and 3-0 victories this season. The five-goal defeat in March was Derry’s first outing at the new Brandywell, where Limerick performed well until a collapse past the hour-mark.

Derry’s win at the Markets Field in April came after Rory Patterson’s late first-half strike and two goals in the final six minutes from Aaron McEneff.

Limerick have not faced Derry on a Friday in three years, going back to a scoreless draw in the North on 17 July 2015.

Team News: 17-year-old defender Tomás O’Connor (pictured) has been promoted to the first-team squad for Friday. Tomás – a centre-half who has also played at right-back in the club’s Academy – will wear squad number 14.

Officials: Referee for the game is Derek Tomney, his assistants are Robert Clarke and Darren Carey, with the fourth official Alan Patchell.