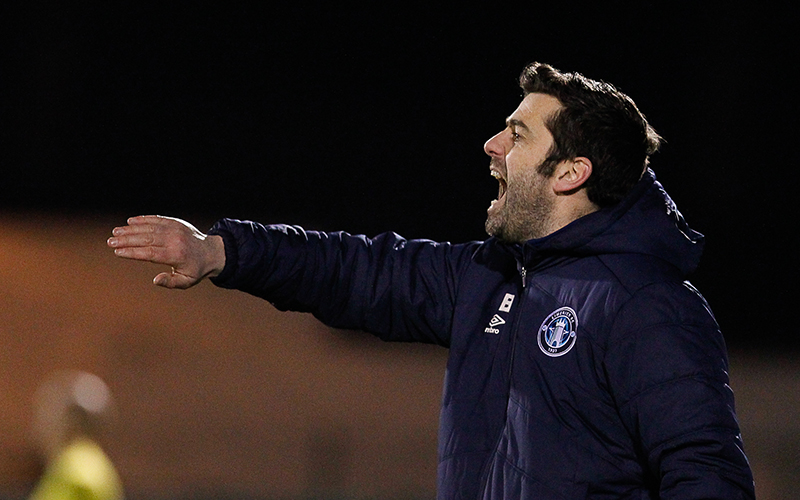 Tommy Barrett feels his players deserved the slice of luck that may have come their way late in the day against Waterford at the Markets Field on Friday night, where the visitors argued that the ball had crossed the line for what would have been a heart-breaking equaliser.

The manager revealed that goalkeeper Tommy Holland insisted that it was not a goal but other Limerick players felt it was “borderline”, as the Shannonsiders held onto a precious 2-1 win and three points in their SSE Airtricity League Premier Division survival bid thanks to captain Shane Duggan’s stunning 83rd-minute strike.

Just two minutes into the night Limerick saw centre-half Eoin Wearen sent off for what was deemed a professional foul on Noel Hunt, a call that Barrett felt was harsh. But he was delighted with Tommy Holland’s heroics from Paul Keegan’s spot-kick and the “great response” that his team showed to their setback as they took a 1-0 lead into half-time thanks to Billy Dennehy’s 34th-minute penalty.

After the sides were evened up by Dave Webster’s dismissal just before the break, Barrett was frustrated by the “naivety” shown in the concession of a leveller just moments after the restart. But in the end, the Superblues got the all-important result as they put together back-to-back league wins at the Markets Field for the first time since October.

“It was a good performance – the boys worked really hard,” Tommy told LimerickFC.ie. “It was difficult for us when we went down to ten men, given the resources that Waterford have. But it was great to get the win – we’re delighted with it.

“The referee felt there was enough contact from Eoin to give the penalty and red card. I don’t think the Waterford players had looked for it. Noel Hunt got his shot away. Eoin said he put his hand across his chest but didn’t pull him. It looked harsh.

“It was a good save from Tommy. He only turned 20 in April but he has games under his belt in the Premier Division and First Division already, so he has experience. He did very well for us. It was a great response from the players; they worked very hard for a result. 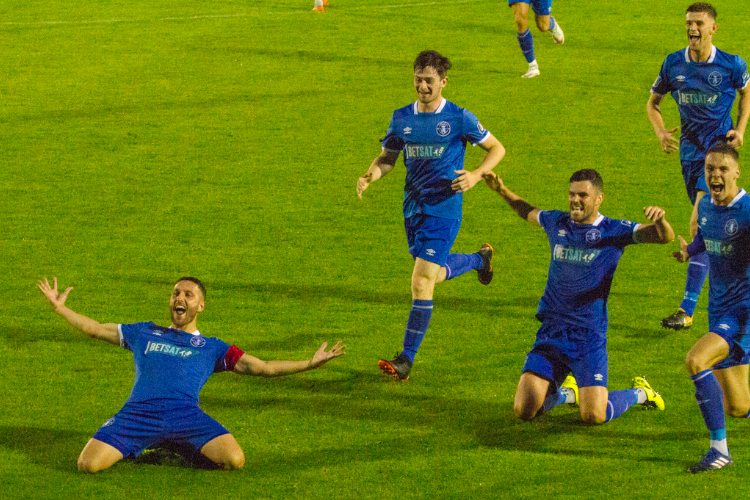 Captain Shane Duggan celebrates his magnificent winner in front of the North Stand.

“From our point of view, it was a very disappointing goal to give away. It was naivety by us, we left ourselves wide open. But the most important thing is that we came back from that and won it. It was a cracker of goal, a great finish. I’m delighted for Duggy. He has that in his locker. He has been unlucky a few times this year with shots. He has been playing well, particularly attacking wise, but I was really impressed with him defensively on the night.”

On the controversial end where Waterford thought they had salvaged a point, Barrett said: “Tommy Holland said it wasn’t over the line; some of the other players felt that it was borderline. The Waterford players were adamant that it was a goal. We have had a lot of decisions go against us this year, in a lot of games, so we’ll take this one.”

The victory saw Limerick move to within two points of eighth-placed Sligo Rovers, while Bohemians – who travel to Dundalk on Sunday – after just two points further ahead in seventh. The Shannonsiders’ next two league fixtures come against the teams directly above them (Bohs away, Friday 3 August, Sligo at home, Friday 17 August).

“It sets it up nicely,” Barrett admitted, “but we might be struggling without some senior players. Eoin will obviously be suspended now and Kilian Cantwell has a ban to serve, so it will be very difficult. But we’ll readjust and go up to Bohemians next Friday and give it our best shot.”