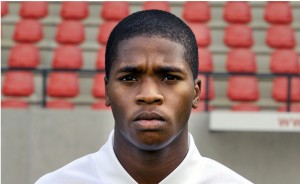 Limerick F.C. are delighted to announce that Axel Bossekota has joined the club after a recent trial period. The 23 year old Belgian striker has impressed the management team after featuring in a number of pre-season games.

Axel joins Limerick after a period playing with Motherwell in Scotland and Stuart Taylor thinks he will cause Airtricity League defences some concerns this season “he’s a very forward thinking player, with a good touch, very athletic and I know he’ll bring a lot to the team. He can play wide or through the middle, is a very exciting player and we look forward to seeing him in action come the league kick off in March.”